Domestic stocks lost ground last week as trade war concerns continued to rattle investors. With these declines, the Dow officially moved back into correction territory. For the week, the S&P 500 lost 1.43%, the Dow dipped 0.95%, and the NASDAQ dropped 2.11%. International stocks in the MSCI EAFE managed a 0.38% increase. 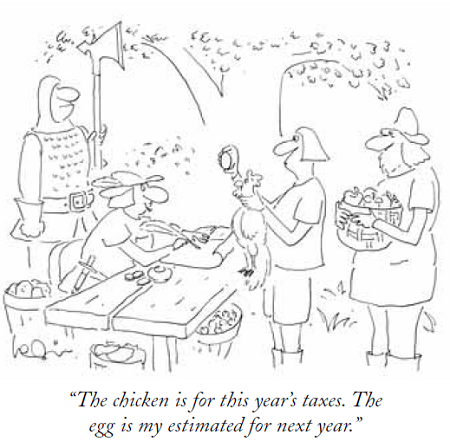 In 1691, England taxed the number of windows on a house. Consequently, houses began to be built with very few windows or people would close up existing windows. When people began to suffer health problems from lack of windows/air, the tax was finally repealed in 1851.

An escalating trade dispute between the U.S. and China wasn't the only headline to affect markets. Last week also brought surprising data from the Labor Department. In March, the economy added 103,000 new jobs - far lower than economists anticipated. Meanwhile, wages grew, and unemployment remained a low 4.1%.

We are now 1 week into the 2nd quarter of 2018. As we examine what may lie ahead in the markets, we will also focus on understanding what has happened so far this year. Here are a few key findings from the 1st quarter.

In 2017, domestic markets experienced little volatility and significant gains. The 1st quarter of 2018, however, did not continue these trends.

Volatility Returned
The CBOE Volatility Index (VIX), a popular measure of volatility, increased by 81% in Q1, as stock performance fluctuated.

Between January and March, the S&P 500 had 23 days when it lost or gained 1%. In 2017's last quarter, the index didn't have a single day where it fluctuated that much. While the return of volatility may feel jarring, it is actually normal. Last year's calm is what is unusual.

Indexes Had Mixed Results
Major domestic indexes hit new records in January then slipped into corrections the next month. By March's end, they recovered somewhat from February's lows, but the S&P 500 and Dow still posted their 1st quarterly losses in more than 2 years. The S&P 500 lost 1.2% and the Dow dropped 2.3%. The NASDAQ ended in positive territory, with a 2.3% gain for the quarter.

The Economy Remained Strong
Despite market volatility and lackluster quarterly performance, the economy appears to be on solid ground. When announcing March's interest rate increase, the Federal Reserve beefed up the economy's growth projections and expressed that "the economic outlook has strengthened in recent months." In 2018, the Fed expects unemployment to fall to 3.8% and the economy to grow by 2.7%.

In the coming weeks, we will receive more data that reveals our Q1 economic performance. We will also work to find answers to important questions for the 2nd quarter, such as: What will happen with trade and tariffs? Will the labor market continue to strengthen? In the meantime, if you have questions of your own, we are always here to talk.

FIRST CELLULAR PHONE CALL WAS MADE 45 YEARS AGO

The first handheld cellular phone call was made on April 3, 1973, by Motorola engineer Martin Cooper from Sixth Avenue in New York.

Cooper hoisted the 2 1/2-pound prototype to his ear and called a rival, Joel Engel of Bell Laboratories at AT&T, to declare that his Motorola team had devised a functional portable phone.

The clunky "shoe" phone, almost as big as a shoebox, allowed a user to talk for 35 minutes and required 10 hours to recharge, according to Wired magazine.

Motorola spent 10 years overcoming technical and regulatory hurdles, and began commercial service in 1983 using a slimmer 16-ounce model that cost between $3,500 and $4,000.

The early phones were too big and expensive to suit most consumers, but they set a precedent for today's sleek and lightweight models that have become standard equipment for just about everybody.

DON'T GET TOO RISKY WITH RETIREMENT SAVINGS

Most retirees and those within 15 years of retirement agree that it's crucial to invest conservatively to protect their nest eggs from stock market losses. But surprisingly, many actually do the opposite, a new poll indicates.

The survey, conducted by Massachusetts Mutual Life Insurance Co. (MassMutual), included 804 preretirees with incomes of at least $40,000 and 801 current retirees with at least $100,000 in investable assets.

Because many retirees rely on their investments for income and have more limited-time horizons to recoup investment losses, a significant market downturn could significantly reduce their income.

It is important to make sure your investment strategy aligns with your long-term retirement goals and your portfolio can weather bear markets that are a natural part of the economic cycle.