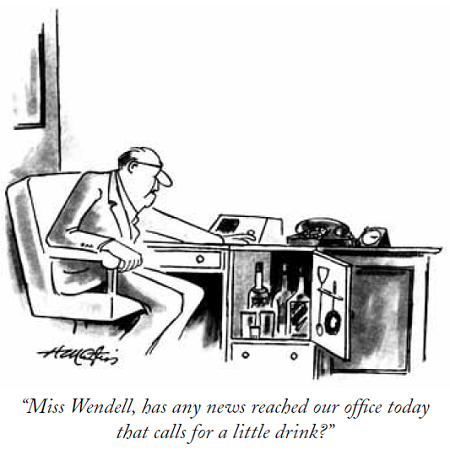 87% of Americans say 'Getting More Followers on Instagram' is a higher priority than their finances.

We received numerous new data updates last week, and most provided positive news for the economy. Retail sales, housing starts, and industrial production all beat expectations and increased in March.

Earnings Season Continued
As of April 20, about 16% of S&P 500 companies shared their results for the 1st quarter, and over 80% of them beat earnings expectations. However, this solid performance has yet to impress investors. While most companies have exceeded earnings projections, their stocks haven't reflected the growth.

On the other hand, companies that have beaten their sales projections - but missed on earnings-per-share - have dropped an average of 4.4% on their release days.

Takeaway: So far, corporate earnings are on the rise, but any companies that don't beat estimates are experiencing considerable stock declines.

Treasury Yields Rose
The yield on 10-year Treasuries hit 2.96% - the highest point since 2014. At the same time, the 2-year yield climbed to its highest since 2008. When interest rates rise, companies have higher borrowing costs, and bonds become a more enticing alternative to stocks.

Some investors are also concerned that the difference between the two Treasuries' yields is too close. This occurrence, known as a flattening yield curve, can imply that investors are not confident in the long-term economic outlook.

Takeaway: Rising Treasury rates are worth paying attention to. If they are a symptom of a growing economy, the markets should be able to handle them. However, if questions about economic growth accompany the increases, investors may worry.

We are now in earnings season's busiest week, when more than a third of S&P companies will release their reports. Additionally, on Friday, April 27, the initial estimate of the 1st quarter Gross Domestic Product will come out.

All this information will help deepen our understanding of where the economy stands - and what may lie ahead. If you have any questions about current data or future projections, we are available to talk.

Phil Coyne, 99, has worked as an usher for the Pittsburgh Pirates since 1936, the year the Baseball Hall of Fame inducted its first members, including Babe Ruth and Honus Wagner. But now he's officially worked his last game in the stands, and is retiring after suffering a recent fall. The team will honor the oldest usher in the Major Leagues with a special ceremony before their game against the St. Louis Cardinals on April 27, which will also be Coyne's 100th birthday.

Coyne worked his first Pirates game at the age of 18 in 1936 and moved with the franchise, starting at Forbes Field, going on to Three Rivers Stadium and, most recently, PNC Park. Last summer, the Pittsburgh City Council honored Coyne by designating Aug. 29, 2017, as "Phil Coyne Day." And on his 99th birthday, the Pirates presented him with a personalized No. 99 jersey. Nearly 200 of his family and friends will be in attendance to celebrate Phil's 100th birthday during a special pregame ceremony.

A retired machinist who never married, Coyne is looked after today by various nieces and nephews. His only break from being an usher was when he served in Italy, France and Germany during World War II.

Coyne told the New York Times that one of his most memorable moments came during the 1960 World Series, when he watched Bill Mazeroski hit a home run in the bottom of the ninth inning of Game 7. The Pirates beat the Yankees, picking up their first World Series win in 35 years.

DETERMINE YOUR NET WORTH

Essentially, your net worth is the value of what you own, minus what you owe. Or, as a formula: assets - liabilities = net worth

An easy way to figure it out it is via an online calculator like the one at Bankrate.com. But you may also want to track your net worth over time to see your progress, in which case you could use an online program like the RFG Wealth Management System that will remember your past results, or even a simple Excel spreadsheet.

To calculate it manually, start by adding together all your assets. Here is a list what qualifies:

Next, subtract your liabilities. If you aren't sure how much you owe, get a copy of your credit report, since all your debts are listed there. Here is a list of common liabilities:

Keep in mind, however, that net worth only offers a snapshot on a moving target.