International trade concerns continue to create uncertainty in markets around the world. Despite the markets' slight rises on Friday, June 29, they recorded losses for the week. The S&P 500 fell 1.33%, the Dow gave back 1.26%, and the NASDAQ dropped 2.37%. Internationally, the MSCI EAFE declined 1.10%. 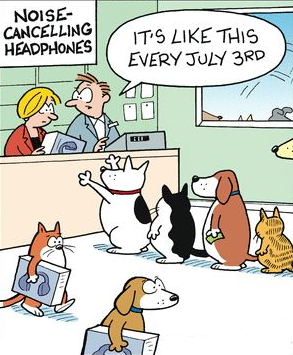 In North Dakota, no one can be arrested on the Fourth of July, a holiday that is commonly known there as "Five Finger Discount Day."

Friday marked Q2's last trading day. The U.S. economy remains strong thanks to low unemployment numbers and strong corporate earnings. Meanwhile, on Thursday, the Fed announced that all but one bank passed stress tests evaluating their ability to weather a financial downturn.

Unfair trade practices take several forms. In one scenario, foreign governments subsidize companies that export products. Those companies may in turn sell their products in the U.S. below cost. This approach can harm U.S. companies, cost jobs, and ultimately damage the economy. The President also argues that imported metals are a threat to national security.

The Impact: New Tariffs on the U.S.

Canada has responded to increased rates on steel and aluminum by announcing $16.6 billion in new tariffs on U.S. products, effective July 1. On July 6, President Trump will determine whether to impose additional tariffs on $34 billion of Chinese goods. Additionally, the U.S. Chamber of Commerce estimates that 2.6 million U.S. jobs could be on the line due to the administration's trade policies.

Already, nearly 21,000 companies have asked for tariff exclusions to import metal duty free. Some of these companies claim the current trade disputes have resulted in layoffs and possible relocations or closures.

Third-quarter trade developments will continue to influence markets and emerging economies. In addition, after the financial sector just posted its longest losing streak ever, analysts will be looking at how and whether they bounce back. Meanwhile, markets will also track the yield curve, which measures the difference between short- and long-term bond pricing. The curve has flattened to its lowest levels since August 2007, as investors drive up long-term bond prices in their search for safety from market volatility.

As details continue unfolding, we'll be sure to keep our pulse on what lies ahead. In the meantime, please contact us if you have any questions on how these details relate to your financial life.

We will all celebrate our country's Independence Day this week, so we would like to give some thought to declaring your own independence, not politically but financially. In other words, when do you become independent from having to work for a living? Given the fact that we're all likely to be unable to work at some point, financial independence, i.e. retirement, will eventually be a necessity. It's only a question of how long you'll be able to enjoy it. Here are some steps for pre-retirees to make that day come sooner:

Seem like a lot? If you need help, consult with an unbiased financial planner. Remember, America didn't have such an easy time declaring independence either but that's why we celebrate with fireworks!

Many high-income retirees face higher effective marginal tax rates due to income-based increases in Medicare premiums - higher earners must now pay up to 80% of the cost of their Medicare Parts B and D benefits.

Medicare premiums are based on modified-adjusted-gross-income levels from two years earlier. If modified adjusted gross income exceeds $170,000 by a single dollar then a couple's Part B premium rises by $1,284. This is precisely like a $1,284 tax increase since they must pay this additional amount to the federal government or face penalties.

Near the end of each year taxpayers should estimate their modified adjusted gross income to ensure, when possible, that it doesn't exceed one of these income threshold levels. And since exceeding a threshold income level by even $1 causes a spike in future Medicare premiums, taxpayers may want to leave a margin for error.

One way to lower the chances of hitting that threshold is to make charitable contributions through qualified charitable distributions. A QCD allows investors to combine two needs - taking their required minimum distributions from an IRA and making donations to charities - and reduce their taxes.

Another option: Suppose a high-income couple is 60 and will begin paying Medicare premiums in five years. They should consider Roth conversions for the next three years, because this strategy would lower their required minimum distributions after age 70 1/2, which may lower their future Medicare premiums.

Finally, if future income will be lower due to a "life-changing event" - such as a work stoppage - you can file Form SSA-44. In that form, you will estimate modified adjusted gross income for 2019 and 2020 and the Social Security Administration will use those lower income estimates to set 2019 and 2020 Medicare premiums. Other life-changing events include marriage, divorce/annulment, death of a spouse and work reduction.