On Friday, July 20, stocks lost a small amount of ground after President Trump escalated his threats of increasing tariffs on China. However, strong quarterly earnings reports from several large companies helped provide balance in the markets. For the week, domestic indexes experienced little movement, as the S&P gained 0.02%, the Dow was up 0.15%, and the NASDAQ dropped 0.07%. International stocks in the MSCI EAFE had slightly more change, with a 0.63% gain. 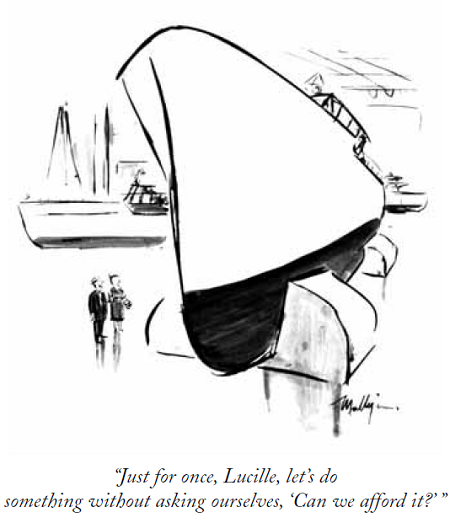 'Yacht' was originally used by the Dutch navy to describe a small boat that was meant to catch pirates. Charles II used a yacht as his own personal vessel, and since then the word has been applied to luxury boats and often linked to important people. The size of yachts vary, and different sized models have different classifications. Your typical yacht will be between 40 and 100 feet, a mega yacht will be between 100 and 200 feet, and a super yacht is any yacht over 200 feet.

What We Learned Last Week

Corporate earnings rose in the 2nd quarter
As of July 20, 87 S&P 500 companies have released their 2nd quarter data. Of these companies, 83.9% surpassed analysts' estimated results. In fact, the earnings season is going well enough that analysts have increased their growth projections. They now expect to see companies average 22% earnings growth over the past year, up from 20.7% growth projections on July 1.

Housing starts dropped
The latest housing-start report came in far below estimates. This decline occurred across all U.S. regions as homebuilders shared concerns about materials costs and labor shortages. However, housing start data often fluctuates from month-to-month, and reports show that the 1st half of 2018 is 7.4% higher than the same time period last year.

What Is Ahead This Week

Corporate earnings season continues, and on Friday, we'll receive the initial reading of 2nd quarter GDP. Last week's retail sales and industrial production numbers contribute to very high expectations for economic growth results. Some estimates indicate that GDP could have increased as much as 5.2% in the 2nd quarter - much higher than the 2% growth between January and March.

We will watch these results closely and look for additional perspectives on the economy's underlying strength. If you'd like to know more about what may lie ahead, contact us any time.

You may be good at building your retirement nest egg - but paying attention to building your social circle, not just your IRA balance, may be equally important. Taking practical steps to combat chronic loneliness - which afflicts about 28 percent of Americans over age 50, according to the University of Michigan's long-term Health and Retirement Study - can pay off in happier lives, and longer ones.

For some, this is not an easy task. An American Sociological Association study found that the average American's circle of confidants declined by one-third between 1985 and 2006.

We experience a much higher quality of life, including improved physical health, when we maintain strong social networks, particularly family relationships according to Timothy B. Smith, a professor of counseling psychology at Brigham Young University in Provo, Utah. On average, people with strong social ties live more than four years longer than others, with social relationships predicting longevity better than factors such as alcoholism, high blood pressure or obesity.

But once kids and grandkids are grown and flown, and retirees say goodbye to colleagues, what's the secret to growing and maintaining a circle of friends? Experts recommend a wide range of initiatives: hobbies, volunteering, art classes, social clubs, government programs that connect older people with schools and young families, and active online communities.

What activities have you found to be helpful in fending off loneliness?

A Roth conversion refers to taking all or part of the balance of an existing traditional IRA and moving it into a Roth IRA.

If you expect to be in a relatively low tax bracket in any given year, you can convert the portion of your IRA that you are willing to pay current taxes on to your Roth IRA.

Other questions to consider: