The close of the year provides an opportunity for investors to step back and consider the wider financial landscape. This week, we're reviewing some key issues that defined 2018, as well as some factors that may influence financial markets in the coming year. 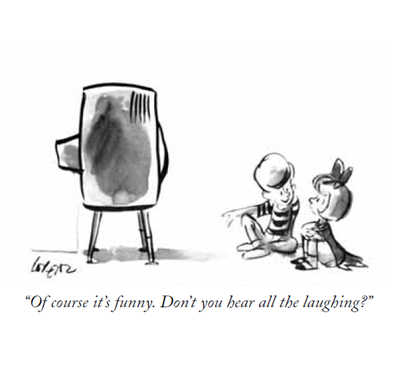 Invented in the late 1940's by Charley Douglass, the "Laff Box" was kept a very closely guarded secret invention. At two feet high, it was played like an organ, with the keyboard keys denoting the style of the laugh, and a foot pedal regulated the length of the laugh. The box was carted around Hollywood and was the only one to insert laugh tracks into TV shows for over a decade, from the late '50s through early '70s. Whatever happened to the box? "The machine is now reduced to the size of a laptop computer and carries hundreds of human sounds and is used today.

Wall Street began 2018 in rally mode, as enthusiasm for the 2017 Tax Cuts and Jobs Act spilled over into the New Year. Strong economic news encouraged investors, who put aside fears that rising inflation may lead to higher interest rates. What Wall Street did not see coming were the spring and summer trade disputes with China, Canada, Mexico, and the European Union. Fear of a global economic slowdown contributed to a sharp decline in stock prices in October. U.S. economic growth forecasts were tempered in November for 2019, with bull and bears engaged in a fierce tug-of-war as the year came to a close.

After expanding at a middling 2.2% pace in the first quarter, the Gross Domestic Product (GDP) rose 4.2% in Q2 and 3.4% in Q3. The Federal Reserve Bank of Atlanta forecasted a 2.7% increase for Q4, which will be released on January 30, 2019 by the Bureau of Economic Analysis. , The Congressional Budget Office expects GDP growth in 2019 to slow to 2.4% "as growth in business investment and government purchases slows."

At the close of its September 2018 meeting, the Federal Reserve raised the federal funds rate to 2.25%, a full percentage point higher than it was a year earlier. Federal Reserve Chair Jerome Powell appeared to change his stance on monetary policy, saying interest rates were "just below" a neutral level. Previously, he indicated rates were a "long way" from neutral.

The number of future interest rate hikes by the Fed may largely depend on its reading of inflation. An uptick in consumer prices or an increase in wage growth may prompt the Fed to consider additional hikes in 2019.

Tariffs were a highlight of 2018 news. On July 10, the Trump administration announced a list of tariffs on $200 billion in Chinese goods. The escalating trade dispute between the U.S. and China is an enormous overhang on the financial markets. The continuing impasse may affect economic growth and push consumer prices higher.

2018 also was a year in which a major trade pact started to come together. The United States-Mexico-Canada Agreement (USMCA) was approved in principle in October. However, the agreement must be approved by Congress and the legislative bodies of Mexico and Canada before it can take effect.

Rising interest rates and robust domestic growth in 2018 lead to a strengthening of the U.S. dollar. A strong U.S. dollar can negatively affect profits of U.S.-based multinational companies, since it can make their products more expensive to overseas buyers. This will also be something to watch in the coming year.

The trend of higher interest rates in 2018 was also felt in the real estate market. The average rate on a 30-year conventional home loan stood at 3.95% in January 2018. At year's end, it was hovering near 5% according to Freddie Mac.

Why do I need an estate plan?

The biggest reason to have an estate plan is to make sure that your personal values about both medical and financial matters are honored in the event that death or incapacity prevents you from acting for yourself. In addition, tax minimization is a further and very important goal of estate planning for persons with taxable estates. To create an estate plan for yourself or update an existing plan, you will most likely need the services of an estate planning attorney.

When you consult with an estate planning attorney, the attorney considers how you want assets distributed to heirs, what taxes your estate might be liable for and whether there are tax-minimization strategies that would be appropriate and appealing; what your preferences and values are with respect to the management of medical and financial affairs in the event of incapacity; and any complicating family issues. To deal with these issues, we often work with you and your attorney to help provide full and accurate information about you.

When an estate plan is formulated, be sure you understand what the attorney is saying. Estate planning ideas can be elusive, but strive for a working knowledge of the material presented for your consideration.

Please contact my office if you or someone you know would like help getting the estate planning process underway.