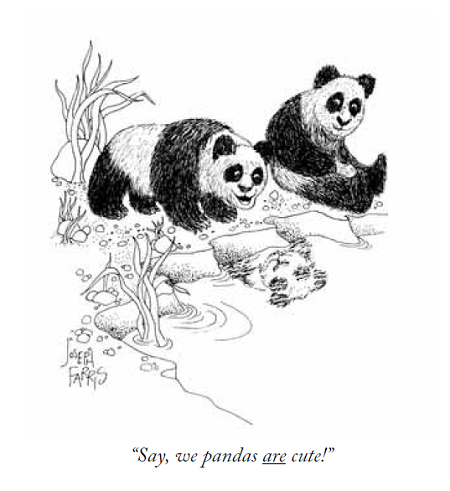 It was not until the 20th century that giant pandas became known to the rest of the world outside of China. The first live giant Panda to leave China in 1936 was named Su-Lin ("a little bit of something very cute"). He arrived at the Brookfield Zoo in Chicago.

What is driving the rally?

Once again, developments in our ongoing trade negotiations with China contributed to the performance. On Thursday, a report emerged that the U.S. was weighing whether to lift tariffs on Chinese imports. However, the Treasury Department said Secretary Steve Mnuchin had not recommended this action. Then, on Friday, Bloomberg released news that China may raise its imports to a level that would close the trade deficit by 2024. This potential sign of progress contributed to the day's market gains.

So far, 11% of S&P 500 companies have released their earnings reports for the 4th quarter of 2018. As expected, growth is not as fast as in the last year's previous quarters, but total earnings are still up 16.9% over the same period in 2017. We are very early in earnings season but anticipate data from another 56 companies coming out this week.

The latest consumer sentiment reading fell to its lowest level since 2016, yet it still remains relatively high. This decline could signal that the current impasse over border-wall funding and the volatile markets are negatively affecting the economy.

The latest data showed that U.S. manufacturing output increased by 1.1% in December. This rate exceeded expectations and may help calm concerns that factory production is slowing.

Since December 22, parts of the Federal government have been closed, marking the longest shutdown in U.S. history. Economists estimate that each week the shutdown continues could reduce our quarterly growth of Gross Domestic Product by up to 0.2%.

Looking ahead, we will not only have earnings data to consider in this shortened trading week, but also information on home sales and durable goods orders. We'll continue to monitor economic reports - and geopolitical developments - as we support each client's long-term goals. As always, if you have questions or concerns, we're here for you.

Roth IRAs hold another advantage, one that becomes increasingly important as you age through retirement. Virtually every other tax-sheltered plan requires you to begin taking required minimum distributions (RMDs) once you turn age 70.5. Roth IRAs stand alone among plans as they do not require RMDs. This allows you to continue accumulating money in your Roth during the time when you must draw down the balances of your other retirement accounts - possibly reducing the risk that you'll outlive your money.

• How does your tax situation impact your decision?

• What effect could future market performance or your plans for retirement have?

Please contact our office if you would like help estimating the potential long-term tax and financial impact of converting to a Roth IRA.