Stocks lost a little ground as February gave way to March. While domestic and overseas political developments made headlines, the market stayed relatively calm: from Monday's open through Friday's close, the S&P 500 ceded just 0.17%, finishing the week at 2,803.69. 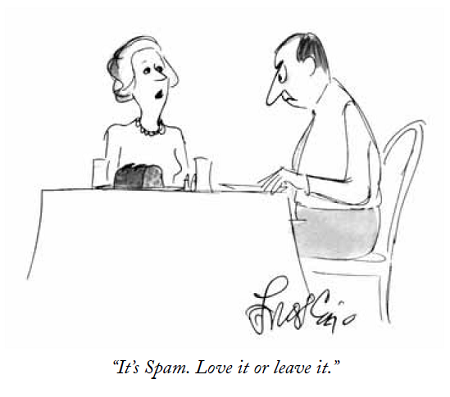 Fact of the Week

Spam recently celebrating its 80th anniversary, it one of the greatest business success stories of all time: Since Hormel Foods Corporation launched the affordable, canned meat product in 1937. Entering its third quarter-century on the rise, it continues to be celebrated in hip NYC restaurants, annual all-day-festivals, and downtown Austin Spam museum.

Volatility has dropped in the past few weeks. Wall Street has grown less anxious about the possibility of new tariffs and higher interest rates this year.

Last week, Federal Reserve Chairman Jerome Powell told the Senate that Fed officials would take a "patient approach" with regard to future interest rate moves. Powell called the economy "healthy," but noted that "conflicting signals" have emerged in recent months; he said that he was not concerned about inflation picking up in response to wage growth.

After making four rate hikes in 2018 and forecasting two more for 2019, the Fed has adopted a "wait-and-see" approach to monetary policy in the new year.

Earlier in the week, President Trump opted to postpone the 15% increase in tariffs on many Chinese imports slated for the start of March. He did not announce a new deadline. Thursday, U.S. officials said the deadline had been suspended "until further notice."

As we noted two weeks ago, the White House had indicated that it might postpone new tariffs if substantial progress was made with China on trade talks.

U.K. lawmakers will vote on a revised Brexit deal on March 12. If they reject it, they have two options left. They can either ask the European Union to push back the March 29 Brexit deadline or choose to leave the E.U. without a deal.

March 15 is the deadline for most partnerships and S corporations to send in their 2018 federal tax returns or extensions. (Some states that tax corporate income set different due dates.)

Financial Strategy of the Week

SPEAK TO YOUR FAMILY ABOUT YOUR ESTATE

No matter how good we are as investors, savers, planners, and personal financiers, other people are almost always affected by our decisions and actions, our successes and our failures. Quite often, the people most affected are those we care the most about. Our children and grandchildren, our spouses and partners, sometimes even our parents, all have an interest in our finances.

Often, people are uncomfortable talking about financial matters, even to relatives who have a legitimate right to know what's going on.

The topics are many:

How do you have a successful family financial meeting?

While there are no magic answers that make this easy, you can nudge the process toward success if you take the time to think carefully about what's most important to you. Most crucial family conversations, even when they seem to be about money, are really about values. This is good news, because, as it turns out, talking about "values" is much easier for many people than talking about money.

Though sometimes it can be tough, having conversations like these can be one of the greatest gifts you can give your loved ones.