As in February, investors spent most of the first full trading week of March hoping for new details in U.S.-China trade negotiations. While they waited, stock benchmarks drifted downward. From Monday's open to Friday's close, the S&P 500 lost 2.55%, while the Dow Industrials took a 2.66% fall, and the Nasdaq Composite weakened 3.12%. The MSCI EAFE index tracking developed markets outside the U.S. and Canada fell 1.09%. 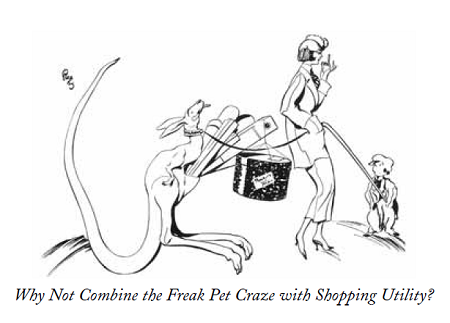 The 1920s and 30s craze: animal mania, like many fads of the era, it was a brief and frivolous phenomenon. Far from the golden era of squirrel ownership and fixture of wealthy urban families during the 1700s through the 1900s, the new craze became a status symbol centered around exotic animals to parade at parties. Collection sizes ranged from small collections of various house pets species of monkeys, bears, and big cats to larger collections including private zoos.

Why did stocks lose momentum?

In a hint that global economic growth might be slowing, the European Central Bank abruptly reduced its 2019 Gross Domestic Product forecast for the eurozone from 1.7% to 1.1%. A disappointing reading on U.S. hiring also raised questions.

According to the Department of Labor, the economy generated only 20,000 net new jobs in February. This was the smallest monthly gain since September 2017. Nevertheless, the unemployment rate fell to 3.8%, while underemployment declined sharply to 7.3%. (These decreases could reflect furloughed federal employees returning to work.) The average wage rose 3.4% in 12 months, the largest year-over-year increase in a decade.

Harsh winter weather may have impeded hiring last month, and February's payroll growth could be revised in the Department of Labor's next report.

The fourth-quarter reporting season is all but over. FactSet notes that the S&P 500 has seen earnings growth of 13.4% in Q4, marking the fifth straight quarter with a double-digit rise.

Stocks lost ground last week, breaking a long string of weekly advances. The extended rally partly reflected optimism that the U.S.-China trade dispute would soon be resolved, but a deal may or may not happen. The week offered a reminder that Wall Street sees both ups and downs. Day-to-day market fluctuations should not cause you to alter your long-term approach.

RESPONDING TO THE IRS

Benjamin Franklin may have recognized life's 2 certainties: death and taxes, but a letter from the IRS can certainly produce a similar sense of doom.

IRS representatives understand the angst a letter from the agency can produce in American taxpayers. Their initial advice to recipients is: Don't panic. Simply responding to the agency's query usually resolves the issue.

Here are 4 more tips to help relieve the stress and address the IRS's questions:

1. Read the letter completely and carefully. The agency is typically looking for an answer to a particular question. Follow the steps closely and do exactly what the letter requests.

2. Compare the issues flagged in the letter with your tax return. If the IRS is pointing to changes or corrections in your return, review the information and compare it with your original return.

3. Reply to the letter only if the agency is asking for a response. The IRS only wants a response when it specifically requests one.

4. Respond promptly. If you don't agree with the issues the IRS is raising, explain in a letter exactly why. Mail the letter to the address listed at the bottom of the letter; include documents and other information. Allow at least 30 days for the IRS to respond.

Other details may apply, and you can find more information on the IRS website.