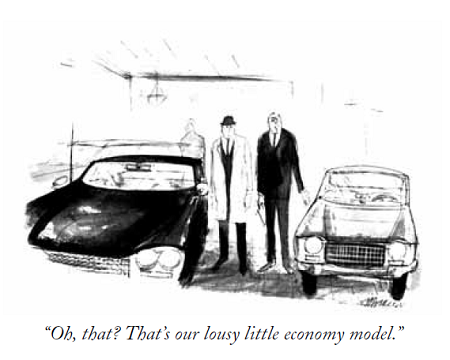 In the 1930s, the styling and aesthetics became an integral part of the car design process as cars became status symbols for middle and upper classes. While European manufacturers were scaling down, America continued to demand and produce boat like designs up until the 1960s.

One of the ride-share pioneers, Lyft, closed on its initial public offering (IPO) on Friday, and a glance at the IPO calendar shows that as many as 226 companies could soon go public, with Uber and Airbnb possibly among them.

This IPO wave may be a signal of a market top, or it may point to a comeback for risk appetite, which could be healthy for the overall market.

Should some big-name IPOs stumble, it may deter others from moving ahead, which may influence the market psychology. Conversely, an enthusiastic reception may help support further market advances.

Good News for the Housing Market

This news is especially significant given the recent pickup in existing home sales. They jumped 11.8% in February, the biggest monthly gain in more than three years.

The federal income tax filing deadline is Monday, April 15, 2019. However, residents of Maine and Massachusetts have until Wednesday, April 17 to file their 2018 tax return. April 15 is Patriots' Day, and April 16 is Emancipation Day.

The IRS announced that it is waiving the estimated tax penalty for taxpayers who 2018 federal income tax withholding and estimated tax payment fell short of their total tax liability for the year.

The relief is designed to help tax payers who were unable to properly adjust their withholding and estimated tax payment to reflect changes under the Tax Cuts and Jobs Act tax reform enacted in December 2017.

The penalty will be waived for any taxpayer who paid at least 80 percent of their total tax liability during the year. For those who paid less than 80% the IRS will calculate the penalty as it normally would.

To request the waiver, a taxpayer must file Form 2210, "Underpayment of Estimated Tax by Individuals, Estates, and Trusts," with his or her 2018 federal income tax return. Taxpayers who have already filed for tax year 2018 but qualify for this expanded relief may claim a refund by filing Form 843, "Claim for Refund and Request for Abatement". For further details, see Notice 2019-25, posted on IRS.gov.

As always, please contact my office if you would like help evaluating your progress toward your financial goals.