In contrast, the MSCI EAFE benchmark for international stocks rose 0.19%. 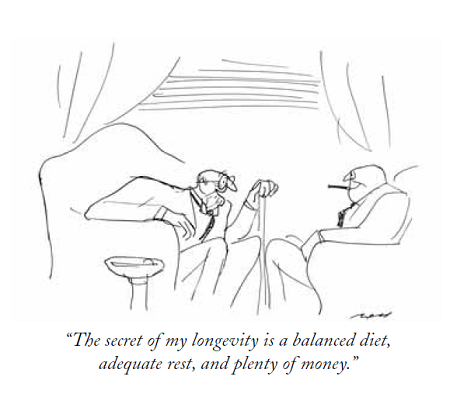 Today marks the celebration of the "National Be A Millionaire Day" honoring the desire to enjoy the freedom and power associated with being financially secure and a day to reflect on necessary steps to develop an action plan or improvement plan for your financial and long-term goals.

The word millionaire first appeared in the English language in a letter written by Lord Byron in 1816. The first multi-millionaire in the U.S. was John Jacob Astor who later established the first trust in American history. His great grandson, John Jacob Astor IV was the wealthiest person aboard the Titanic.

The Latest Trade Developments A broad selloff occurred Monday after China announced it would respond to increased U.S. tariffs by boosting its own import taxes on $60 billion of U.S. products. Friday morning, the Street breathed a sigh of relief as the Trump administration decided to delay 25% tariffs planned for imported cars and car parts; they had been slated to take effect on May 18. Just hours later, President Trump announced an end to U.S. tariffs on metals coming from Canada and Mexico.

At midweek, Secretary of the Treasury Steven Mnuchin told reporters that he expected the U.S. to resume trade negotiations with China in "the near future."

The first-quarter earnings scorecard is nearly complete, as more than 90% of S&P 500 companies have reported actual Q1 results.

Stock market analytics firm FactSet notes that 76% of these firms have beaten consensus earnings-per-share estimates. Overall earnings for S&P 500 components have surpassed expectations by 5.4%. Both these percentages are above 5-year averages.

The market is quite sensitive to trade developments at the moment, and it is unclear whether this will be a short-term trend or a long-term influence on prices. While the U.S. prepares its next moves, China also is preparing its response to any new U.S. tariffs, which could include manipulating its currency.

WHY USE A LIVING TRUST

A living trust is a legal document in which assets are placed into for your benefit during your lifetime and then distributed to designated entities upon death. The "successor trustee" is the person you assign to ensure assets placed into the trust distribute to the right places upon your death. There are many benefits to having a living trust.

Living trusts avoid the probate process, which can take months to even years until your assets are distributed to heirs. Living Trusts also have a better chance of holding up in the event someone contests the distribution of assets. Another benefit of a living trust is that it provides privacy with regards to how you want the assets distributed.

A will, on the other hand, is not a private document and will be on public record so anyone can see it. While a living trust makes sense for some, wills will be just fine for others. You should consult your estate planning attorney to seek out the right options for you.As always, please contact my office with any questions or financial concerns you may have.