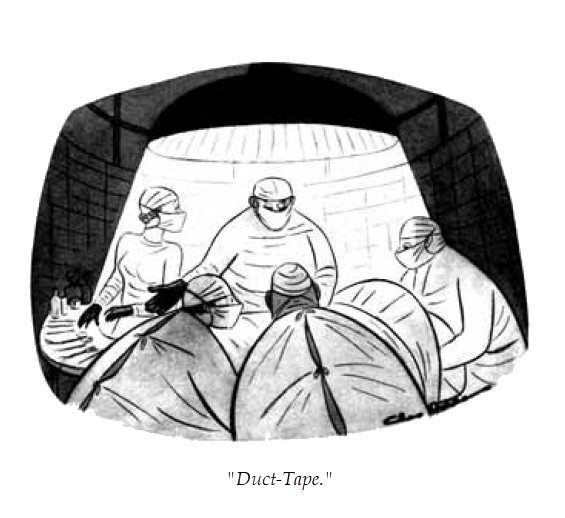 Today, Duct Tape is one of the most commonly used tools for day to day life with quick and dependable fixes for an array of items. The idea for such a product was by Vesta Stoudt, a mother of two Navy servicemen who worked in Green River Ordinance Plant, IL. The plant received feedback about the difficulty soldiers were having during battle to open the waterproof packaged cartridges used for rifle grenades.

Vesta proposed the idea of a strong, cloth-based tape replacement to waterproof the packages which was liked by many workers in the plant but never moved forward. The tape was later produced with the help of FDR after receiving a letter from Vesta suggesting to move forward with her idea.

The Dow Jones Industrial Average, Nasdaq Composite, S&P 500, and MSCI EAFE all ended the week with gains. Blue chips led the way, as the Dow added 1.22%. The Nasdaq improved 1.06%; the S&P, 0.85%. The EAFE, tracking developed stock markets away from North America, was up 0.76%. The Dow recorded its third straight weekly gain; the S&P, its fifth.

Will Tariffs Phase Out or Remain?

Thursday, a spokesman for China’s commerce ministry said that U.S. and Chinese trade representatives had “agreed to remove” existing tariffs in “phases,” while working toward a new trade deal.

On Friday morning, President Trump told the media that he had not agreed to any such condition. President Trump and Chinese President Xi Jinping are still expected to sign off on “phase one” of a new bilateral trade agreement.

As most U.S. companies provide services rather than manufacture products, this news is encouraging and suggests more momentum in that sector.

Monday is Veterans Day; the stock market will be open, but the bond market, plus all federal government offices, will be closed.

You're making enough money and you're saving enough, but you're putting it all in conservative investments. That's fine, right? Wrong! If you want to build a sizable portfolio, you have to take on risk, which means you'll have to invest in equities. So how do you determine the right level of exposure for you?

Begin with an assessment of your situation. To begin, determine your return and risk objectives. Quantify all of the elements affecting your financial life including household income, your time horizon, tax considerations, cash flow/liquidity needs, and any other factors that are unique to you.

Next, determine the appropriate asset allocation for you. Your allocation will most likely include a mixture of cash, fixed income, equities and alternative investments.

Risk-averse investors should keep in mind that portfolios need at least some equity exposure to protect against inflation. Also, younger investors can afford to allocate more of their portfolios to equities than older investors, as they have time on their side.

Finally, diversify. Invest your equity and fixed-income exposures over a range of classes and styles. Do not try to time the market. When one style (e.g., large-cap growth) is underperforming the S&P 500, it is quite possible that another is outperforming. Diversification takes the timing element out of the game. A qualified investment advisor can help you develop a prudent diversification strategy.