What Drove the Markets?

Four factors influenced investment performance in 2019: a shift in U.S. monetary policy, the ongoing trade dispute between the U.S. and China, earnings, and the economy. 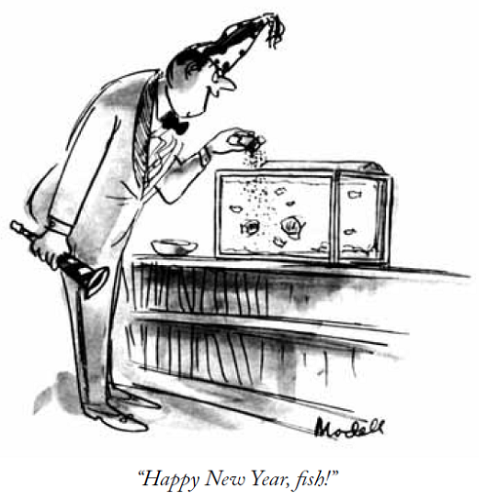 Spain: It is customary to eat 12 grapes - one at each stroke of the clock at midnight. Each grape represents good luck for one month of the coming year.

Brazil: It is tradition to throw white flowers and candles into the ocean as an offering to the Goddess of the Sea.

United States: Across the states, family and friends gather to celebrate the New Year and tune in to watch the ball drop in NYC, a tradition that began in 1907 after firecrackers were outlawed.

Greece: Onions hang on the front door of homes as a symbol of rebirth in the New Year.

At Friday’s close, the Dow Jones Industrial Average showed a year-to-date advance of 22.95%, while the Nasdaq Composite was up 35.74% YTD. The MSCI EAFE index, representing foreign stocks, was up 18.10% YTD through December 27.

The central bank made three quarter-point cuts to the benchmark short-term interest rate in 2019. That was a change from 2018 when the Fed worked on normalizing monetary policy with interest rate increases while thinning its large bond portfolio.

By and large, investors welcomed the policy shift. At the end of 2018, there were concerns that the Fed’s effort to tighten the money supply had backfired, with higher U.S. interest rates impeding both the domestic and global economy.

The U.S. and China Trade Quarrel Cooled Down Slightly

In December, representatives from both nations agreed on a “phase-one” trade deal after a year-and-a-half of imposing tariffs on each other’s products. This pact, which is expected to be signed in 2020, is characterized as an initial step toward a larger deal.

In May, the U.S. put 25% tariffs on $200 billion of Chinese imports; a month later, China imposed a 25% import tax on $60 billion of U.S.-made goods reaching its shores. These tariffs may be reduced or removed as part of the phase-one deal. (Another $120 billion worth of Chinese goods are currently under a 7.5% tariff, reduced from 15% by the new agreement.)

Stock market analysts were pessimistic about corporate profits as the year began. With economies worldwide slowing down in 2018, year-over-year earnings growth for S&P 500 firms seemed poised to decelerate.

Deceleration was evident, but later in the year, many firms managed to exceed reduced estimates. According to the stock market analytics firm FactSet, 75% of S&P 500 components beat earnings-per-share forecasts in Q3, compared to a 5-year historical average of 72%.

Manufacturing output varied, as CEOs were less sure about expansion and capital investments in the first half of the year; it declined in Q1 and Q2 before improving again in Q3. The Conference Board’s consumer confidence index was at 125.5 in November, above its (revised) January mark of 121.7. Inflation stayed under 2% for most of the year before reaching a 12-month high of 2.1% in November.

Congress passed the Setting Every Community Up for Retirement Enhancement (SECURE) Act before Christmas, and President Trump signed it into law last week. This new law alters a fundamental rule of traditional retirement accounts.

It raises the age for Required Minimum Distributions (RMDs) from these accounts, from 70½ to 72. (If you are now 70½ or older, this change does not affect your scheduled RMDs. Only those who turn 70½ in 2020 or later are subject to the new rule.)

An orchestra is merely a collection of instruments, each creating a unique sound. It is only when a conductor leads them that they produce the beautiful music imagined by the composer.

The typical build of a retirement strategy pillars on your 401(k) plan, your IRA, and taxable savings. Getting the instruments of your retirement to work in concert has the potential to help you realize the retirement you imagine.

Maximizing the effectiveness of your retirement strategy begins with understanding the hierarchy of savings.

If you’re like most Americans, the amount you can save for retirement is not unlimited. Consequently, you may want to make sure that your savings are directed to the highest priority retirement funding options first.

For many, that hierarchy begins with the 401(k), followed by an IRA, and, after that, put toward taxable savings. You will then want to consider how to invest each of these savings pools. One strategy is to mirror your desired asset allocation in all retirement accounts.

Another approach is to put the income-generating portion of the allocation, such as
bonds, into tax-deferred accounts, while using taxable accounts to invest in assets whose gains come from capital appreciation, like stocks.

When it comes to living off your savings, you’ll want to coordinate your withdrawals. One school of thought recommends that you tap your taxable accounts first so that your tax-deferred savings will be afforded more time for potential growth. Another school of thought suggests taking distributions first from your more mediocre performing retirement accounts since this money is not working as hard for you.

In any case, each person’s circumstances are unique, and any strategy ought to reflect your particular risk tolerance, time horizon, and goals.