November 2nd, 1898 was a date worth cheering about as it was the day football fan Johnny Campbell of the University of Minnesota became America's first widely-acknowledged cheerleader.

Other universities followed by example across the nation, and for the next quarter-century, America's cheerleaders, considered as honorary cheerleaders, made up of groups of men exclusively. "The reputation of having been a valiant 'cheerleader' is one of the most valuable things a boy can take away from college," The Nation magazine wrote back in 1911. "It ranks hardly second to that of having been a quarterback." 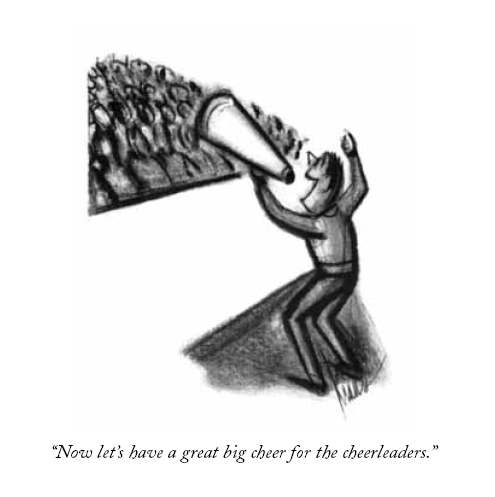 A Difficult Week for Stocks

Stocks opened the week lower as lawmakers failed to pass a fiscal stimulus bill and a pick up in the number of new COVID-19 cases in the U.S. and Europe. The hardest hit were companies most exposed to pandemic-related economic impacts, including energy, travel and leisure, and industrials.

Losses accelerated mid-week on reports of rising COVID-19-related hospitalizations, along with news that Germany and France were reinstating partial shutdown restrictions. Stocks attempted to recover on Thursday but took another leg lower on Friday as earnings reports from the mega-cap technology companies failed to impress investors.

There were several positive economic reports during the week, but investors paid little attention. Among the highlights were durable goods orders, which rose for the fifth consecutive month, a sharp drop in initial jobless claims that were the lowest since March 14th, and a 33.1% annualized jump in economic growth during the third quarter. Investors also ignored a strong start to earnings season, which has seen 85% of reporting companies in the S&P 500 beating earnings estimates by an average margin of 19%.

Social Security and Payroll Taxes, What You Need to Know Today

Who Gets Social Security?

Employees pay 6.2 percent of every paycheck into FICA (Federal Insurance Contributions Act). Also, employees pay another 1.45 percent Medicare tax. Employers also pay the same amount on behalf of their employees. Self-employed people pay both employer and employee portions of payroll taxes, 12.4 percent plus 2.9 percent. In other words, if you're self-employed, you pay twice as much payroll tax.

SSRI taxes are not due on income above that amount. Medicare, however, is taxed on every dollar earned regardless of the income level. In other words, there is no cap on the income for the 2.9 percent Medicare tax.

A payroll tax holiday began on September 1, 2020, and runs through the calendar year's end. Optionally, employers may give employees a boost to their paychecks of 6.2 percent, equal to the employee's portion of the Social Security tax. However, it is a temporary benefit because, in January 2021, employees will be subject to a double-withholding to pay back the short-term loan.

Most Americans are at least a little bit worried about the future of Social Security. Only 18 percent of Americans are confident they will receive SSRI. SSRI expenditures are expected to grow to nearly $2 trillion by the year 2030. As a percentage of America's gross domestic product, SSRI is expected to increase from just under 5 percent to over 6 percent of GDP by 2030.

Americans spend more on income tax and Social Security than any country in the world outside of Europe or Australia. Despite that, the Congressional Budget Office (CBO) regularly makes dire predictions for Social Security solvency. On the other hand, a new school of economics — called "Modern Monetary Theory" — posits that the U.S. government can afford SSRI pay. It's best to build a solid personal financial plan to carry you through retirement and not worry about things outside our control, like national politics and the federal budget.

Taking it Early is Expensive!

For many reasons, people start SSRI early. Some people cannot wait until full retirement age before taking benefits for financial reasons. Others take SSRI for political reasons, afraid that the government may not pay the full promised benefit. If a person pulls SSRI early, she will permanently reduce her income and surviving spouse's income for life. The earliest a person can make a withdrawal is age 62.

If a person waits until age 70, he receives the maximum SSRI. Each year he waits from Full Retirement Age until age 70 gives him another 8 percent income per year. Many people choose to work longer and delay SSRI. They may pull income from other sources, like a retirement account, if they are healthy and can afford to wait. Talk with a professional to find out the right decision for you.

SSRI and Medicare go hand-in-hand, but the years do not line up. A person may start SSRI at age 62 and age 70, but Medicare does not begin until age 65. An early retiree faces the dilemma of paying for health insurance before starting Medicare. The costs of individual insurance plans can be prohibitive. Working with a CFP® professional can help you decide how to pay for it and determine the benefits you may receive. For example, you might qualify for subsidized insurance rates.

Anyone who works 40 quarters is entitled to Social Security. The amount of payment is based on the highest 35 years of income. People who work for the federal government, or other governments, may have their SSRI benefits reduced. Generally, Social Security benefits are reduced by two-thirds of the non-FICA-taxed government pension.

Social Security Retirement Income is an important income source for retirees. The laws are confusing, and the choices may seem overwhelming. In today's world, information is omnipresent and often partisan. Emotions can run high, making it difficult to make a prudent, long-term decision. A financial professional can help you decide what is best for you and your unique situation.