Fears of an impasse in the U.S.-China trade dispute lessened last week. While additional U.S. tariffs on Chinese imports were scheduled to take effect on September 1, China’s government communicated that it would refrain from taking retaliatory measures for the moment. 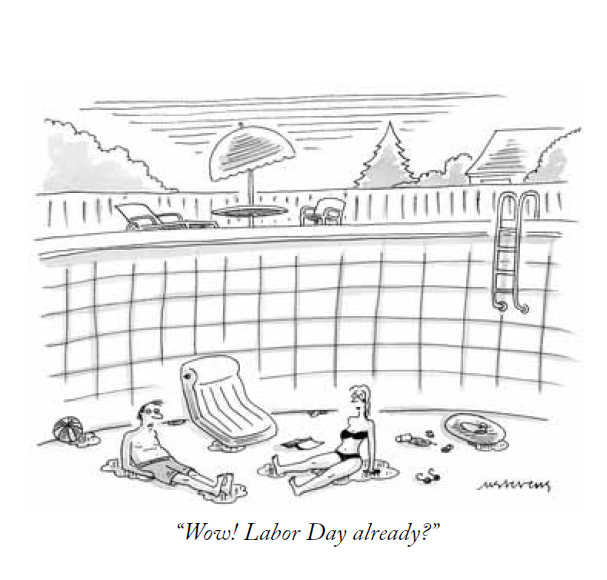 Many people believe the first Labor Day was celebrated in 1882 with a worker’s parade march in New York City, the origins date back even earlier than that and in an entirely different country.

Throughout the latter half of the 19th century, workers all over the globe were protesting, but it was Canada that led the push for labor rights.

Eventually, as protesting events grew increasingly popular, labor organizations pressured the government to declare the first Monday in September a national holiday called Labor Day. And eventually, in 1894, they succeeded.

Positive News in the Trade Dispute

Thursday, a spokesman for China’s commerce ministry said that negotiations could resume this month, and that discussions need to focus on “removing the new tariffs to prevent escalation.”

In addition, officials in Beijing indicated they would hold off on responding to the U.S. tariff hikes announced Friday by the White House.

The Conference Board’s monthly consumer confidence index was at 135.1 in August. Analysts polled by Reuters had projected a reading of 129.5. Consumers’ view of the present economic situation was the best since November 2000.

On the other hand, the University of Michigan’s monthly consumer sentiment index (based on a different collection of survey data) dropped 8.6 points during August to 89.8; that was its biggest monthly descent in nearly seven years.

After a pause for the Labor Day holiday, U.S. financial markets have an abbreviated trading week. The August jobs report may influence Friday’s Wall Street session, and any news pertaining to U.S.-China trade talks could also influence the markets.

THE WEEK AHEAD: KEY ECONOMIC DATA

PREPARE YOUR RETIREMENT FOR THE NEXT DOWNTURN

The recent market selloff was frightening for anyone saving and investing for retirement. But the prospect of a major slump in stock prices can be especially upsetting for people who have recently retired or are close to calling it a career.

If you're in that position, here's how how to reduce the possibility you'll have to revamp your retirement plans in the next bout of market turbulence:

Review how much of your nest egg is invested in stocks, as that will largely determine how much your portfolio's value will drop if the market slumps.

You want to avoid taking a huge hit to the value of your savings, since the combination of investment losses and portfolio withdrawals can dramatically shorten the longevity of your nest egg, especially if that combo occurs just before or soon after you've retired.

There's no single stock/bond mix that is ideal for everyone. As a rule, you want to invest enough in stocks to maintain your nest egg's purchasing power over the long term, but not so much that you'll incur stomach-wrenching losses and end up selling in a panic during a market meltdown.

Go over your retirement budget to see if there are ways you might lower your spending - and thus portfolio withdrawals - to give your nest egg a better chance to rebound from any investment losses.

To the extent possible, you will want to identify discretionary expenditures (travel, entertainment, dining out, etc.) you might reduce or eliminate rather than essential ones, which probably offer less leeway for cutting back.

But if paring non-essential spending doesn't give you enough wiggle room, you can look into other possibilities for reducing outlays, such as downsizing or moving to an area with lower living costs.

Look for ways you might generate some extra income to pick up the slack of smaller withdrawals, such as taking out a reverse mortgage or picking up part-time work.

And while postponing retirement entirely may be a more extreme solution than you'd prefer, working longer to give your nest egg a chance to recoup losses can be an effective move that's worth investigating.

Remember to be patient. While it's important to be aware of the impact a market downturn might have on your retirement prospects, you should also keep in mind that even a significant market setback doesn't necessarily doom you to a post-career life of poverty.

Just as markets slump, they also recover, and as stock prices rebound, so too can your prospects for a secure retirement.