On December 19, 1732, Benjamin Franklin of Philadelphia first published Poor Richard’s Almanack. The book, filled with proverbs preaching industry and prudence, was published continuously for 25 years and became one of the most popular publications in colonial America, selling an average of 10,000 copies a year.

Franklin was born in Boston in 1706 and was apprenticed to his brother, a printer, at age 12. In 1729, Franklin became the official printer of currency for the colony of Pennsylvania. He began publishing Poor Richard’s, as well as the Pennsylvania Gazette, one of the colonies’ first and best newspapers. By 1748, Franklin had become more interested in inventions and science than publishing. He spent time in London representing Pennsylvania in its dispute with England and later spent time in France. He returned to America in March 1775, with war on the horizon. He served on the Second Continental Congress and helped draft the Declaration of Independence. He was also instrumental in persuading the French to lend military assistance to the colonies. He died in Philadelphia in 1790. 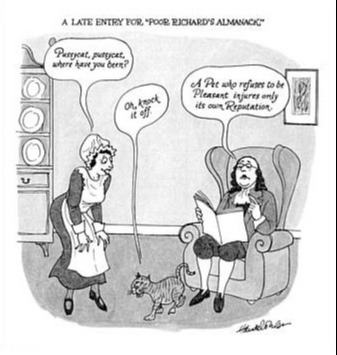 Stocks Under Pressure
Stocks began the week on a positive note, supported by a cooler-than-expected Consumer Price Index (CPI) report. Stocks reversed direction mid-week, however, following the Federal Open Market Committee (FOMC) meeting in which another 0.5% rate hike was announced. The half-point increase was widely anticipated, but the increase in the terminal rate (i.e., the point at which the Fed stops raising rates) rattled investors. Continued hawkishness by Fed Chair Powell at the post-meeting press conference added to investors’ anxiety. The potential for higher rates for longer, along with disappointing economic data, particularly a sharp decline in retail sales, amplified fears of a recession and sent stocks lower for the remainder of the week.

Inflation And The Fed
The release of November’s CPI showed inflation cooling for the second consecutive month, as prices rose just 0.1% month-over-month and 7.1% from a year ago. Both were better than expected. The FOMC ended its last meeting of 2022 by raising interest rates another 0.5% and signaling that it would likely continue to hike rates into the new year. At a subsequent press conference, Fed Chair Powell commented that the next rate increase could be a quarter-percentage point. Most FOMC members appear to support raising the terminal rate (the point at which hikes end) to above 5%, up from its September projection of 4.6%.

Unless you’re lucky enough to win the lottery or be the recipient of an inheritance, becoming financially independent takes a substantial amount of planning, dedication, and discipline. But what a huge accomplishment when you get there! As you work toward financial independence and building wealth, it may be necessary to engage professional help to ensure the wealth you build is protected.

When your hard work has finally resulted in the accumulation of significant assets, a sound estate plan and a tax strategy play a large part in maintaining the wealth you’ve built. These plans also protect that wealth for your loved ones by passing on your financial legacy. Here are two professionals to consider working with when considering your path to long-term financial independence:

Estate Planning Attorneys. Estate planning can be complex, especially if you have special circumstances, like a second (or later) marriage, you own one or more businesses, or you have a disabled family member, for example. Consulting with an estate planning attorney may be a necessary step in ensuring you’re doing everything you can to protect and maximize your wealth. Estate Planning Attorneys are accredited professionals who can help you create legal documentation. A will is just a start. Estate planning attorneys can also help with trusts, health care directives for dependents with special needs or end-of-life situations, powers of attorney, and more.

Tax Advisors. Tax advisors are professionals who provide tax guidance to households and businesses. Look for a CPA (certified public accountant) or EA (enrolled agent) designation. CPAs are qualified in all areas of public accounting, including taxation and auditing. EAs, on the other hand, specialize only in taxation. These professionals can identify ways to maximize your portfolio and minimize the tax burden.