When Carter arrived in Egypt in 1891, he became convinced there was at least one undiscovered tomb – that of the little known Tutankhamen, or King Tut, who lived around 1400 B.C. and died when he was still a teenager. Backed by a rich Brit, Lord Carnarvon, Carter searched for five years without success.

In early 1922, Lord Carnarvon wanted to call off the search, but Carter convinced him to hold on one more year. In November 1922, the wait paid off, when Carter’s team found steps hidden in the debris near the entrance of another tomb. The steps led to an ancient sealed doorway bearing the name Tutankhamen. When Carter and Lord Carnarvon entered the tomb’s interior chambers on November 26, they were thrilled to find it virtually intact, with its treasures untouched after more than 3,000 years. The men began exploring the four rooms of the tomb, and on February 16, 1923, under the watchful eyes of a number of important officials, Carter opened the door to the last chamber.

Inside lay a sarcophagus with three coffins nested inside one another. The last coffin, made of solid gold, contained the mummified body of King Tut. Among the riches found in the tomb – golden shrines, jewelry, statues, a chariot, weapons, clothing – the perfectly preserved mummy was the most valuable, as it was the first one ever to be discovered. Despite rumors that a curse would befall anyone who disturbed the tomb, its treasures were carefully catalogued, removed and included in a famous traveling exhibition called the “Treasures of Tutankhamen.” The exhibition’s permanent home is the Egyptian Museum in Cairo. 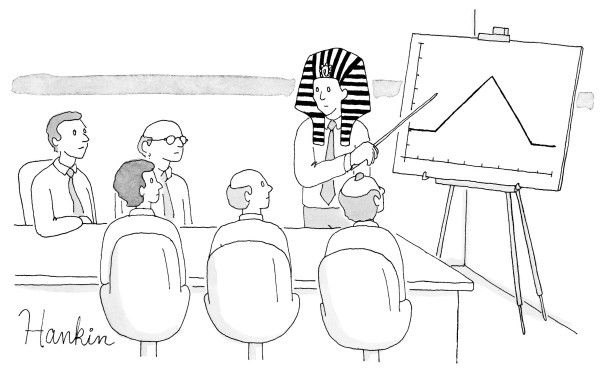 Stocks powered higher to begin the week, buoyed by rising confidence in economic recovery and the potential for another round of fiscal stimulus. Small cap stocks continued their 2021 rally as investors looked for out-of-favor names that might benefit from an economic rebound.

Stocks traded in a tight range through the remainder of the week. Investors appeared to digest current stock price valuations, wondering if the market had already “priced in” the optimism of a rebounding economy.

On Wednesday, Fed Chair Powell gave assurances that the Fed’s rate policy would remain unchanged for the foreseeable future. Some fear that inflation may pick up with broader re-openings and additional fiscal stimulus.

A survey by The Wall Street Journal showed increasing optimism among economists about economic growth for this year.

Among the survey’s findings, economists, on average, now expect the economy to expand by 4.9%, an increase from their average estimate of 4.3% last month. They are, however, somewhat less sanguine about employment as they now expect 4.8 million jobs to be added this year, versus an earlier expectation of 5.0 million.

Economists are forecasting accelerating inflation as a consequence of economic growth and fiscal stimulus, but believe that there is only a 17.5% probability of an economic downturn in the next 12 months, an improvement from its 21.2% risk estimate in January.

Chances are that you’ve heard about various 401(k) benefits. However, even if you already have one of these employer-sponsored retirement plans, you might not understand exactly how a 401(k) works. Of course, the more you know about 401(k)s, the more you'll be able to take advantage of those 401(k) benefits.

Named after a section of the Internal Revenue Code, 401(k)s are employer-sponsored defined-contribution plans (DC) that give workers a tax-advantaged way to save for retirement.

If your employer offers a 401(k), you can opt to contribute a percentage of your income to the plan. The contributions are automatically taken out of your paycheck, and you can deduct them on your taxes.

Withdrawals from your 401(k) are taxed at your prevailing income-tax rate when you take money out. There are restrictions on how and when you can withdraw money from the account.

If you withdraw funds from a 401(k) before you reach age 59½, you’ll be hit with a 10% early-withdrawal penalty fee as well as any applicable taxes. At age 72, you must begin taking required minimum distributions (RMDs) from the plan. Previously, the RMD was 70½, but following the passage of the Setting Every Community Up For Retirement Enhancement (SECURE) Act in December 2019, the RMD age is now 72.

If you're still working at age 72, you don't have to take RMDs from the plan at your current workplace (see below for details). You will, however, need to start making withdrawals from 401(k)s at any former employers if you have any.

The tax advantages of a 401(k) begin with the fact that you make contributions on a pre-tax basis. That means you can deduct your contributions in the year you make them, which lowers your taxable income for the year.

To compound the benefit, your 401(k) earnings accrue on a tax-deferred basis. That means the dividends and capital gains that accumulate inside your 401(k) are also not subject to tax until you begin withdrawals.

Some employers offer to match the amount you contribute to your 401(k) plan. And some even add a profit-sharing feature that contributes a portion of the company's profits to the pot as well. If your company offers one or both of these features, sign up for them—they essentially represent free money.

With some retirement accounts, you cannot contribute once you turn 72, even if you’re still working. That means any money you might have contributed on a pre-tax basis is instead taxed at your current rate. And that's likely to be higher than the rate you'll pay once you retire.

Notably, 401(k)s don't have this drawback. You can continue to contribute to these for as long you're still working. Even better, while you're working, you're spared from taking mandatory distributions from the plan provided you own less than 5% of the business that employs you.