Stocks meandered around a flatline in a busy week of corporate earnings, ending the trading week slightly lower.

Mother’s Day has been celebrated around the world since, well, since motherhood. In the United States, Julia Ward Howe inspired the first movement toward a national observance during the Civil War. Appealing to the public for a “Mother’s Day for Peace” after witnessing the devastation left by war, Howe went on an international crusade. While her efforts never gained formal recognition for an official observance, she was acknowledged posthumously in 1988 for her achievements.

In 1905, Anna Jarvis, the daughter of Ann Marie Reeves Jarvis successfully introduced the idea for a national holiday recognizing mothers. Ann Marie Reeves Jarvis had followed Howe’s campaign and had pursued her own volunteer efforts during the Civil War. Ann Marie died on May 9, 1905, and her daughter, Anna, missed her mother greatly. She started a dedicated letter-writing campaign to declare an official Mother’s Day. Through Andrews Methodist Church in Grafton, West Virginia, the first observance occurred on May 10, 1908.

This day, to honor Anna Jarvis’s mother, grew into a national observance until in 1911 when every state participated. Soon it was spreading internationally, and on May 9, 1914, President Woodrow Wilson proclaimed Mother’s Day a national holiday to be held on the second Sunday of May. 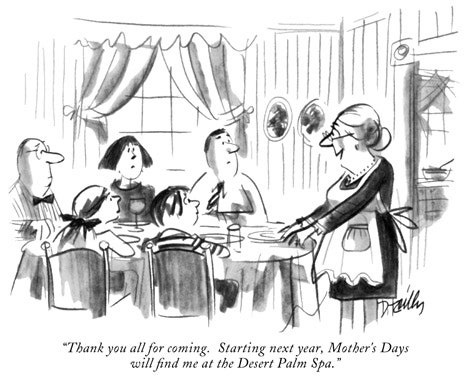 Though the S&P 500 and Nasdaq established new record highs at the start of the week, stocks struggled to find traction as the week wore on.

Once again, though, stocks failed to follow through, as the market retreated in the final day of trading to close near where it began the week.

Last week was the biggest week of the first quarter’s earnings season with a third of S&P 500 companies reporting, including six of the largest companies.

With expectations high, businesses generally topped Wall Street analysts’ estimates; Big Tech companies posted especially noteworthy earnings. Coming into last Friday, with 40% of S&P 500 index companies reporting, earnings-per-share growth (EPS) is now estimated to be 29.3%, well ahead of the 12.2% EPS growth rate that analysts had expected at the start of the year.

Have you been let go at work? What happens to the money you have saved in your employee retirement plan?

If you have been terminated by your employer, you have 4 choices when it comes to your retirement plan money:

4) Roll it over into an IRA (with no taxable event occurring, and with the ability to direct the money into many different types of investments)

Consider an IRA rollover. This is a smart move. Through a trustee-to-trustee transfer, you avoid the 20% withholding tax that would otherwise be incurred by simply taking a distribution from the old plan and depositing that money in an IRA.

Want more tax-deferred growth for your retirement savings? An IRA rollover allows that to happen. You get continued tax deferral, you retain personal control over the money, and you can revise or change your investment mix as you wish.

Please reach out if you would like to discuss this or any topic further.