A strong opening to the third-quarter earnings season sparked a late week, broad-based rally that helped stocks finish the week with solid gains.

The first parachute jump of note was made by André-Jacques Garnerin from a hydrogen balloon 3,200 feet above Paris.

Leonardo da Vinci conceived the idea of the parachute in his writings, and the Frenchman Louis-Sebastien Lenormand fashioned a kind of parachute out of two umbrellas and jumped from a tree in 1783, but André-Jacques Garnerin was the first to design and test parachutes capable of slowing a man’s fall from a high altitude.

Garnerin first conceived of the possibility of using air resistance to slow an individual’s fall from a high altitude while a prisoner during the French Revolution. Although he never employed a parachute to escape from the high ramparts of the Hungarian prison where he spent three years, Garnerin never lost interest in the concept of the parachute. In 1797, he completed his first parachute, a canopy 23 feet in diameter and attached to a basket with suspension lines.

On October 22, 1797, Garnerin attached the parachute to a hydrogen balloon and ascended to an altitude of 3,200 feet. He then clambered into the basket and severed the parachute from the balloon. As he failed to include an air vent at the top of the prototype, Garnerin oscillated wildly in his descent, and he landed shaken but unhurt half a mile from the balloon’s takeoff site. In 1799, Garnerin’s wife, Jeanne-Genevieve, became the first female parachutist. In 1802, Garnerin made a spectacular jump from 8,000 feet during an exhibition in England. 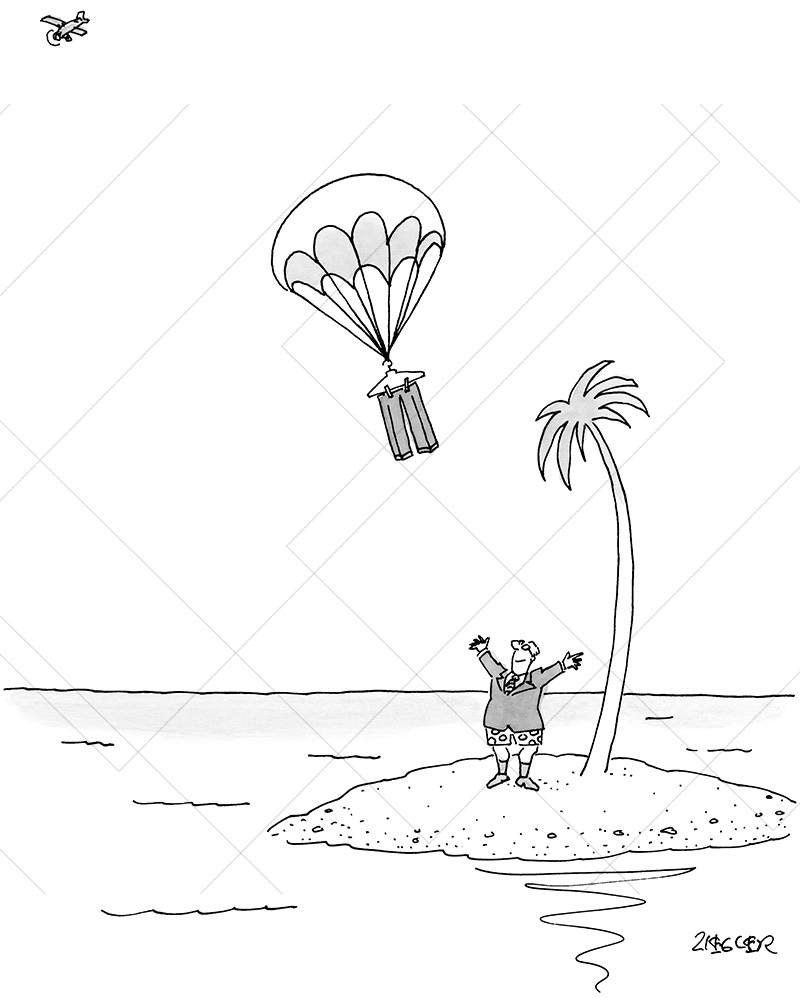 After beginning the week on a lackluster note, stocks turned higher on Wednesday as companies kicked off a new earnings season and details about the Fed’s taper plans emerged. Investor enthusiasm shifted into high gear the following day on positive economic data and earnings reports that exceeded investor expectations. Buying continued through Friday on fresh earnings surprises and a better-than-expected retail sales report.

The economic data allayed some concerns about inflationary pressures and economic deceleration, while early earnings results provided hope that companies had weathered the surge in summer Covid infections. Nevertheless, worries about how supply-chain disruption and higher prices may impact corporate earnings guidance haven’t gone away.

Minutes from September’s Federal Open Market Committee released last week provided detail around the Fed’s plans to taper its $120 billion monthly bond purchase program. The Fed expects to reduce its purchases by $15 billion each month, beginning in mid-November/December and ending in June 2022.

This tapering schedule is somewhat faster than what investors were anticipating, reflecting the Fed’s concern that inflation has been somewhat higher and more persistent than it had anticipated, with continuing supply-chain bottlenecks raising that risk level. Fed Chair Powell’s commitment to transparency and advanced signaling of policy changes appeared to have worked, as markets greeted the news calmly. In fact, stocks rallied strongly the following day as yields moved lower.

Some people approach buying a car like they approach marriage, “‘til death do us part.” Others prefer to keep their options open, trading in every few years for the latest make and model, the most cutting-edge technology, or the highest horsepower. Whichever describes you best, we all face a similar decision when it comes to acquiring a car: finance, lease, or pay cash.

About one-third of people lease their cars, but most choose to finance, and some still pay cash. From an investment perspective, which choice is best? That depends on your lifestyle, cash flow, and personal preferences.

For many, paying cash for a car is the simplest way to get one. When you drive off the lot, you own the vehicle outright and are free to do whatever you want with it. You face no penalties or mileage restrictions, and you have no monthly payments. However, you have paid cash for a vehicle that is expected to depreciate over time.

Financing a new car requires a smaller initial outlay of money, usually 20% or more of the vehicle’s value, in the form of a down payment. When you drive off the lot, the bank owns the car, not you. As with most loans, you make monthly payments of principal and interest with the promise of eventual ownership. The amount of your payment depends on a variety of factors, including the value of the car, the length of the loan, and the interest rate offered by the lender. Car dealers sometimes will offer “no money down” or low annual percentage rate loans, which can make financing more manageable.

If you like to have a new car every few years, leasing is an approach to consider. Leasing a car is like renting an apartment. You pay a monthly fee to use the car for a specific amount of time, usually two to three years. Monthly payments are typically lower than when you finance, since you are paying for the depreciation on the car while you drive it. In certain situations, lease payments may also have tax considerations. However, there are caveats to leasing. For one, a lease typically stipulates the number of miles you are permitted to drive during the course of the lease. At the end of your lease, you may face penalties if you have exceeded the total number of miles in the contract.

Whatever your relationship with your car, it may eventually come time for a new one. Familiarize yourself with your options. You may find that changing your strategy makes sense in light of your lifestyle or financial situation.