A Federal Reserve announcement on tapering, a fresh batch of corporate profits, and encouraging economic data lifted stocks to another weekly gain.

On November 8, 1895, physicist Wilhelm Conrad Röntgen (1845-1923) becomes the first person to observe X-rays, a significant scientific advancement that would ultimately benefit a variety of fields, most of all medicine, by making the invisible visible.

Röntgen's discovery occurred accidentally in his Wurzburg, Germany, lab, where he was testing whether cathode rays could pass through glass when he noticed a glow coming from a nearby chemically coated screen. He dubbed the rays that caused this glow X-rays because of their unknown nature.

Röntgen's discovery was labeled a medical miracle and X-rays soon became an important diagnostic tool in medicine, allowing doctors to see inside the human body for the first time without surgery. In 1897, X-rays were first used on a military battlefield, during the Balkan War, to find bullets and broken bones inside patients.

Wilhelm Röntgen received numerous accolades for his work, including the first Nobel Prize in physics in 1901, yet he remained modest and never tried to patent his discovery. Today, X-ray technology is widely used in medicine, material analysis and devices such as airport security scanners. 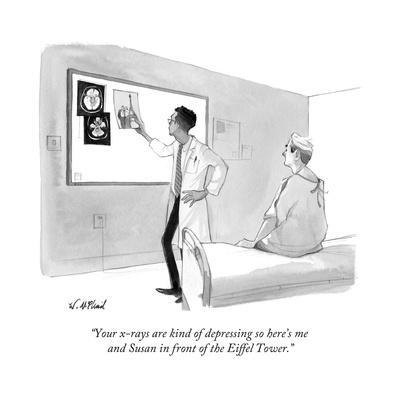 Stocks marched higher throughout the week, lifted by a succession of positive corporate earnings surprises, optimistic forward guidance by some companies, and healthy economic data. Continued strong third-quarter profits reinforced the narrative that businesses were able to meet strong consumer demand and maintain robust profit margins, despite the headwinds of inflation and supply-chain knots.

Investors were unfazed by the Fed’s mid-week announcement that it would begin its bond purchase tapering plans, in part, because it had long been telegraphed and Fed Chair Powell’s optimistic analysis of the current state of the economy. Also cheered was the announcement of a new COVID-19 antiviral pill and a powerful rebound in job creation, driving stocks to new heights to close out the week.

In an eagerly awaited November meeting of the FOMC (Federal Open Market Committee), the Fed pulled the trigger on its plan to taper monthly bond purchases. Fed tapering will begin this month with reductions of $15 billion per month ($10 billion in Treasurys and $5 billion in mortgage-backed securities) that will end this pandemic-era policy response by July 2022.

The Fed reiterated its belief that inflation remained transitory, though conceding it had underestimated its acceleration and persistence; it did not expect interest rates to be raised until after the completion of the tapering program. Powell expects inflation to stay elevated until mid-2022 when he anticipates supply-chain bottlenecks to clear.

While many predicted a bump of as much as 6.1% given recent movement in the Consumer Price Index (CPI), the announced 5.9% increase is still substantial. Some fear that rising consumer prices may dilute the impact of the increase with inflation currently running at more than 5 percent. While this remains to be seen, Social Security beneficiaries will no doubt welcome the largest adjustment in many years.

How You Will Be Notified

According to the Social Security Administration, Social Security and SSI beneficiaries are usually notified about their new benefit amount by mail starting in early December. However, if you’ve set up your SSA online account, you will also be able to view your COLA notice online through your “My Social Security” account.

If this increase surprises or concerns you, it's always a good idea to seek guidance from us about changes to any of your sources of retirement income. I welcome a chance to talk with you about this.