An exceptionally volatile week, marked by wide intraday price swings, whipsawed investors with stocks ending higher following a surge to the upside on the final trading day of the week.

On February 1, 1790 in the Royal Exchange Building on New York City’s Broad Street, the Supreme Court of the United States meets for the first time, with Chief Justice John Jay of New York presiding.

The U.S. Supreme Court was established by Article Three of the U.S. Constitution, which took effect in March 1789. The Constitution granted the Supreme Court ultimate jurisdiction over all laws, especially those in which constitutionality was at issue. The court was also designated to rule on cases concerning treaties of the United States, foreign diplomats, admiralty practice, and maritime jurisdiction.

In September 1789, the Judiciary Act was passed, implementing Article Three by providing for six justices who would serve on the court for life. The same day, President George Washington appointed John Jay to preside as chief justice, and John Rutledge of South Carolina, William Cushing of Massachusetts, John Blair of Virginia, Robert Harrison of Maryland, and James Wilson of Pennsylvania to serve as associate justices. Two days later, all six appointments were confirmed by the U.S. Senate.

The Supreme Court later grew into arguably the most powerful judicial body in the world in terms of its central place in the U.S. political order. In times of constitutional crisis, it always played a definitive role in resolving the great issues of the time. 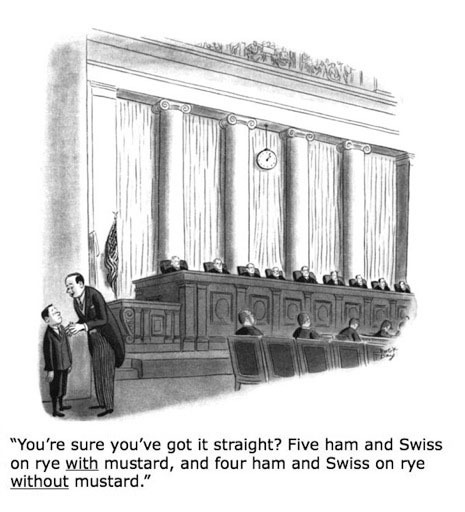 Rising bond yields, Federal Reserve uncertainty, and escalating tensions on the Ukrainian-Russian border unsettled markets all week. The week opened with two successive days of deep early losses that were erased by furious, late-afternoon rebounds. The following two-trading sessions that started with strong gains that evaporated with late-session selling.

The most dramatic session was Monday, in which stocks ended slightly higher after hitting intraday lows that saw the NASDAQ fall 4.9%, the Dow shed 1,115 points, and the S&P 500 moved into correction territory. Technology was at the epicenter of the volatility all week as rate fears weighed on sector. Stocks rebounded strongly on Friday, managing to conclude a week on an upbeat note.

Last week’s meeting of the Federal Open Market Committee (FOMC) left rates unchanged, though officials signaled short-term rates would likely be raised at its next meeting in March. As expected, the Fed also approved one last round of bond purchases, bringing quantitative easing to an end by March.

Left a bit more nebulous were details on the pace and timing of reducing the Fed’s balance sheet, a lingering worry of some investors. But Fed Chair Powell indicated that shrinking the Fed’s asset holdings may occur at a faster rate than in past periods of balance-sheet reductions, such as in 2014 and 2017.

Turning 50 represents not only an age milestone, it can also signal the start of some of our best accomplishments in life. There are lots of ways to make the most of your fifties, especially when it comes to taking care of your finances.

According to the IRS, 50 is the magical age when you get to contribute thousands of dollars more to your retirement account each year. You can even increase the amount you put into your individual IRA. Catch-up contribution limits differ between retirement account types, and they may change from year-to-year. Be sure to visit the IRS website for the most current limits.

This special perk is a real gift to investors looking to boost their savings, and even if your birthday doesn’t come until the very end of the year you can still take advantage.

Another thing to think about in your fifties is that as you age, so do your parents. And often that means we’re helping out quite a bit, from estate-planning to downsizing to the potential need for long-term care.

Many of us don’t want to have those conversations, or maybe you don’t even know how to begin. But discussing these critical issues today could be the key to a better relationship as you and your parents continue through life’s stages, because it helps you understand your parents’ situation and their plans. It may be easier than you think, especially if you use these compassionate, caring ways to engage your parents and begin the dialogue:

• Ask for their advice: “I’m putting my will together. How did you go about doing this?”

• Stress that they are part of the decision-making process: “I want to be sure we know what you want done.”

• If you don’t see eye-to-eye on a decision, don’t argue. Instead, ask: “If this doesn’t work out the way you expect, what else might you do?”

Ideally, these discussions can lead to the creation or update of an estate plan, durable powers of attorney for finances and for healthcare, and a living will, so there are no misunderstandings or surprises as you continue to help your parents. Make sure you keep a copy of the signed documents in your files so you can find them as needed or revisit them in the future. If you don’t have an attorney you trust to work with, please reach out for assistance.

If you’re not already in the habit of annually reviewing your estate plans, powers of attorney, insurance and investment account beneficiaries, your fifties is a great time to start.

For many people, the process of estate planning seems like a hassle. If you’ve already told your family what you want, why do you need a written plan? For starters, estate taxes could add an even greater burden to your loved ones if something unexpected happened to you. Working with a professional planner helps ensure your estate is structured properly so your family gets what you’ve worked for, instead of the government. It also makes sure that you’re able to continue taking care of those who are important to you, just as though you were still around. Finally, it guarantees that you are cared for according to what you want, even if you can’t speak for yourself.

It’s important to review your plans, documents, accounts and beneficiaries every year to be sure they still accurately reflect your wishes.

Long term care insurance covers the cost of care in the case of an extended illness or disability. The price for long term care ranges from $19 an hour to $229 a day, depending on the level of care you need, and it is NOT covered by Medicare. That means your retirement nest egg could be gobbled up by just one health crisis requiring long-term care.

But do you really need another kind of insurance? How do we know this isn’t just one more insurance company scare tactic? It’s a great question. The federal government’s Administration on Aging tells us that MOST Americans ages 65 and older will in fact need long term care. So it’s no scare tactic, but there are ways you can be sure long-term care coverage is right for you:

Compare policies and read all the fine print. Know exactly what coverage the policy offers. You may be able to purchase a less expensive policy for a lower level of coverage and still offset the cost of care.

Apply earlier rather than later. The best time to apply is before you develop health problems. A survey from the American Association of Long-term Care Insurance found that insurers rejected 44% of applicants ages 70-79 and 17% of those 50-59.

Couples can buy shared benefit policies. This may make coverage more affordable. Each person would sign up for a two-year plan, for example, but one spouse can use all four years if needed.

No matter what, if you purchase a long-term care policy, be sure you let your family know so it’s used even if you’re incapacitated, continue paying your premiums regularly and on-time so the policy remains in-force, and remember to review your LTC plan every year, just like you do with all your health and life insurance policies.

Financial Tip #5: Examine How You Spend Your Extra Cash

The “Lifestyle Inflation Trap.” For many of us, our fifties represent our peak earning years. We’re more established, have become accustomed to our lifestyle, and have created habits that we live by. This pride and satisfaction in our lives, which we’ve worked for our entire career, can also lead to a temptation to “outdo” or over-reward ourselves. Sometimes we may even spend money we don’t have just to keep up appearances, and that can put a major dent in financial planning efforts.

The occasional splurge is fine, and can even be healthy. But don’t make a habit of spending unnecessarily just because you’ve got the money. Keep your eyes on the prize: in your fifties, building a secure nest egg is your most important goal, and one that can help lead you to a happy, contented financial life in retirement.

If dollars are burning a hole in your pocket and you really dislike the thought of excess cash sitting in your checking account, why not make a charitable donation? You’ll feel better, a worthy organization will benefit, and, maybe best of all, you can write it off on your taxes. If you need some ideas on great charitable organizations or ways to create charitable tax benefits with donations, we can help.

As always, we're here in case you have questions regarding any of these matters, and are ready to update your plans with you whenever the need arises.