More than 99 percent of Earth's gold is missing - it all sank to the center of the planet billions of years ago. In fact, says geologist Bernard Wood of Macquarie University in Australia, there's enough gold in Earth's core to coat its surface in 1.5 feet of the stuff.

How did it get there? Earth formed from a series of smaller planetesimals that crashed together over the course of 30 million to 40 million years. Wood deduced how much gold ought to be present in Earth's crust by comparing the crust's composition to that of meteorites similar to the planetesimals. He concluded that the crust was depleted of gold, platinum, and nickel and suggests that all these iron-loving elements were pulled into Earth's iron-rich core while its surface was still an ocean of molten magma.

In fact, if meteorites hadn't later deposited gold on Earth's surface millions of years after its core had fully formed and its crust had cooled, gold would be even more rare and expensive than it is today. Wood has calculated that 1.6 quadrillion tons of gold must lie in Earth's core. This may sound like a lot, but it is really only a tiny percentage of the core's overall mass - about one part per million. The core holds six times as much platinum, Wood notes, "but people get less excited about that than gold." 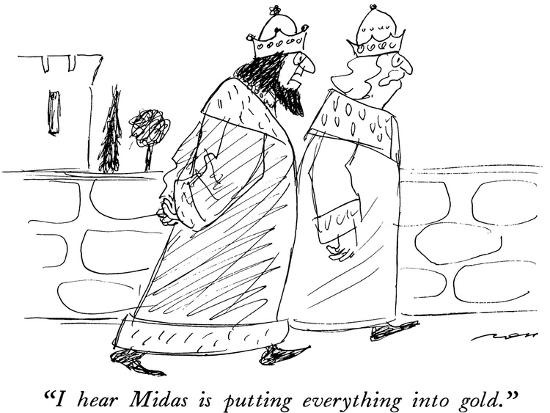 Historically high consumer and producer price inflation reports were shrugged off by the stock and bond markets in the main, with bond yields slipping despite the hot inflation numbers. Despite an encouraging start to the first-quarter earnings season, stocks pulled back on Friday as bond yields resumed their move higher ahead of a three-day holiday weekend.

An Eye on Inflation

On Tuesday, March’s Consumer Price Index (CPI) report offered little indication that inflation may be moderating, as prices increased 8.5% year-over-year, the fastest pace in 40 years. Core inflation, excluding food and energy prices, recorded a 6.5% jump, the steepest rise since August 1982. One encouraging note was that core inflation showed potential signs of ebbing, posting a monthly increase of 0.3% versus expectations of a 0.5% increase.

The following day, March’s Producer Price Index, a potential insight into future inflation, rose 11.2% year-over-year. A March survey by the National Federation of Independent Business released earlier in the week, indicated that half of the respondents were likely to raise prices in the next three months.

Heading off to college is an exciting time for your child, but covering education expenses can be pretty painful. With the proper financial planning, you could be whistling your child’s college fight song all the way to the bank.

With Americans marrying later in life and waiting to have children, parents may face making tuition payments while simultaneously trying to save for retirement. This problem is best addressed by starting your college savings plan EARLY! Here are a few options to consider:

Scholarships, Grants, and Aid. Financial aid can include loans, scholarships, grants, and work-study programs. Even if your student isn’t in the top level of their class, opportunities may be available for financial aid. A student can be awarded grants or scholarships based on financial need, academic standing, extra-curricular activities, even civic involvement. Always fill out the financial aid application, even if you believe your income is too high to receive aid.

529s. These college savings accounts are available in every state. 529s allow you to contribute to an investment account in the child’s name and then make tax-free withdrawals for qualified educational expenses. Plans and investment options vary widely, so consult with your financial professional for more information. There may also be potential state income tax or other benefits to offer that should be considered.

(A 529 plan is a college savings plan that allows individuals to save for college on a tax-advantaged basis. Every state offers at least one 529 plan. Before buying a 529 plan, you should inquire about the particular plan and its fees and expenses. You should also consider that certain states offer tax benefits and fee savings to in-state residents. Whether a state tax deduction and/or application fee savings are available depends on your state of residence. For tax advice, consult your tax professional.)

IRA Withdrawals. You can make penalty-free withdrawals from an existing IRA account for qualified educational costs. However, there are contribution and withdrawal limits, and not everyone can qualify for an IRA. Withdrawals also reduce the assets growing tax-deferred in the IRA and could seriously impact your retirement goals.

Coverdell Accounts. If grandparents wish to contribute to an account, you may want to consider a Coverdell Savings Account. A Coverdell allows anyone with a modified adjusted gross income of less than $110,000 a year (single) or $220,000 joint (married, filing jointly) to make yearly contributions of up to $2,000 for the benefit of a minor. Once the student turns 18, they have until their 30th birthday to withdraw the money for educational use.

The variety of options and plans available for college planning can seem overwhelming, and these are just a few ideas. Ready to talk through your options? Schedule some time with our office to discuss how to balance your child’s education and your retirement. Please reach out to us if you have any questions regarding this matter or any other topic.