During the American Revolution, the Continental Congress adopts a resolution stating that “the flag of the United States be thirteen alternate stripes red and white” and that “the Union be thirteen stars, white in a blue field, representing a new Constellation.” The national flag, which became known as the “Stars and Stripes,” was based on the “Grand Union” flag, a banner carried by the Continental Army in 1776 that also consisted of 13 red and white stripes. According to legend, Philadelphia seamstress Betsy Ross designed the new canton for the Stars and Stripes, which consisted of a circle of 13 stars and a blue background, at the request of General George Washington. Historians have been unable to conclusively prove or disprove this legend.

On June 14, 1877, the first Flag Day observance was held on the 100th anniversary of the adoption of the Stars and Stripes. As instructed by Congress, the U.S. flag was flown from all public buildings across the country. In the years after the first Flag Day, several states continued to observe the anniversary, and in 1949 Congress officially designated June 14 as Flag Day, a national day of observance. 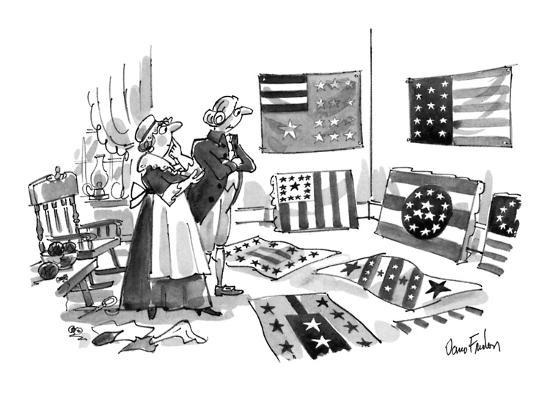 A higher-than-expected inflation report triggered a sell-off on Friday, leaving stocks in the red for the week.

Stocks gyrated between gains and losses last week until sliding lower on Friday’s hot inflation report, which heightened worries over a more aggressive Fed and a further economic slowdown. Stocks moved higher to begin the week, despite rising bond yields, a profit warning from a major retailer, and Senate testimony by Secretary of Treasury Janet Yellen, who said that inflation was likely to remain elevated.

Stocks turned lower later in the week on renewed concerns of an economic slowdown, sparked by a downward revision in The Federal Reserve-Atlanta’s real-time estimate of second-quarter GDP growth and a drop in new mortgage applications. Investors lightening up on stocks ahead of Friday’s inflation report may have also contributed to Thursday’s selling.

Consumer prices rose 8.6% year-over-year in May, marking the highest rate since December 1981. Price increases over the last 12 months were driven by a 34.6% jump in energy prices and by food costs, which climbed 10.1%. Used car and truck prices, which had seen three straight months of declines, rose 1.8% from April, while airfares soared 12.6% in May.

May’s inflation exceeded economists’ forecasts and dashed the hopes that inflation had plateaued. In a separate economic report on Friday, real wages (net of inflation) fell 0.6% in April and were lower by 3% from 12 months ago.

What are the potential benefits? Withdrawals are tax- and penalty-free if used to cover qualified educational expenses. A qualified educational expense can include tuition, fees, and books for a child at a private elementary or secondary school or a public or private college (not a comprehensive list). The beneficiary can use Coverdell funds penalty-free until they reach the age of 30, after which any leftover funds will be taxed at the ordinary income. Fortunately, leftover funds can be transferred to another family member to avoid the penalty.

Is a Coverdell ESA right for your education funding plan? Feel free to contact our office to discuss this or any other topic.