Undaunted by another Fed rate hike and news of a contracting economy, the stock market rallied last week on better-than-expected corporate earnings.

The Dow Jones Industrial Average increased 2.97%, while the S&P 500 picked up 4.26%. The Nasdaq Composite index gained 4.70% for the week. The MSCI EAFE index, which tracks developed overseas stock markets, rose 0.95%.

FACT OF THE WEEK
On August 2, 1776, members of Congress affix their signatures to an enlarged copy of the Declaration of Independence. Fifty-six congressional delegates in total signed the document, including some who were not present at the vote approving the declaration. The delegates signed by state from North to South, beginning with Josiah Bartlett of New Hampshire and ending with George Walton of Georgia. John Dickinson of Pennsylvania and James Duane, Robert Livingston and John Jay of New York refused to sign. Carter Braxton of Virginia; Robert Morris of Pennsylvania; George Reed of Delaware; and Edward Rutledge of South Carolina opposed the document but signed in order to give the impression of a unanimous Congress. Five delegates were absent: Generals George Washington, John Sullivan, James Clinton and Christopher Gadsden and Virginia Governor Patrick Henry.
Exactly one month before the signing of the document, Congress had accepted a resolution put forward by Richard Henry Lee that stated “Resolved: That these United Colonies are, and of right ought to be, free and independent States, that they are absolved from all allegiance to the British Crown, and that all political connection between them and the State of Great Britain is, and ought to be, totally dissolved.” Congress adopted the more poetic Declaration of Independence, drafted by Thomas Jefferson, two days later, on July 4. 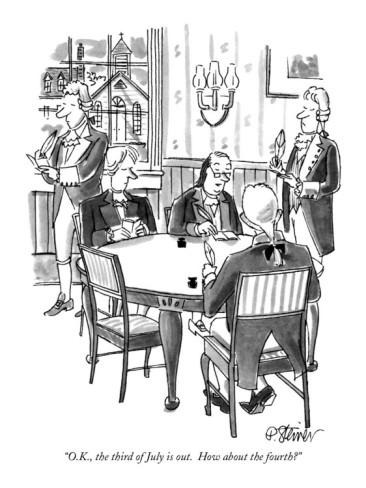 MARKET MINUTE
﻿Stocks Rally on Earnings
It was an inauspicious start to the week after a big-box retailer missed earnings and reduced forward guidance on Tuesday, sparking a broad market retreat.
But sentiment improved following mega-cap technology company earnings that proved better than expected. Enthusiasm gathered steam in the wake of the Fed’s 0.75% rate hike, boosted by Fed Chair Powell’s comments following Wednesday’s Federal Open Market Committee meeting. Powell indicated that it might become appropriate to slow the pace of future hikes, and he didn’t believe the economy had entered into recession. Stocks on Thursday shrugged off news of a second-consecutive quarter of negative economic growth to build on Wednesday’s gains as fresh earnings continued to comfort, if not impress, investors.
Economy Contracts
The U.S. economy shrank at an annualized rate of 0.9% in the second quarter as consumers pulled back on spending and businesses worked to reduce inventories. It was the second-consecutive quarter of negative economic growth, meeting the technical definition of a recession. Unlike past recessions, hiring has been strong all year, with the unemployment rate near historic lows.
The economic slowdown was attributable primarily to decreases in inventories, a deceleration in the housing market, and lower government spending. Consumer spending increased a tepid one percent, well below the inflation rate during the same period.

If you are anticipating an annual bonus this year, it’s wise to come up with a thoughtful plan for the extra cash before it comes so you can get the most benefit from it. If you need more time to consider your options, deposit the money in a savings account. It will be harder to chip away at it if it’s not connected to your debit card. Here are a few other suggestions:

Increase your Bonus’s Value. Contributing the maximum allowed to a pretax employer retirement plan can make your bonus go farther than using after-tax dollars, especially if your employer matches the contributions. If your income falls within IRS guidelines, you may be able to make pretax contributions to your 401(k) and a traditional IRA or add post-tax contributions to a Roth IRA, which will grow tax-free.

Put Your Money to Work. Since a bonus is extra money, it may be easier to use it to for an investment with long-term growth potential rather than coming up with additional investment money from your regular pay.

Build Your Emergency Fund. Everyone should have liquid savings available to cover at least six months’ worth of living expenses should the unexpected occur. If you keep your fund in a savings account, consider shopping around for the best rates, or consider a short-term CD.

Invest in Yourself. Many of the most successful people continually pursue knowledge and increase their skills. You might take a coding course, learn a language, hire a health coach, pay for a professional certification, or enroll in a professional speaking program

Plan an Experience. Research indicates great memories often provide more satisfaction than purchases. Plan a vacation to give your household something to look forward to.

If you have funds from an annual bonus that you’d like to discuss or any changes to your financial goals for the year, we’d love to hear and put a plan together to help you reach those. Please don’t hesitate to give us a call about this or any other topic.