Peter M. Maris, CFP®
August 15, 2022
Share |
THE WEEK ON WALL STREET
﻿﻿﻿
An improving inflation outlook buoyed investors’ spirits last week, helping lift stocks to solid gains. The Dow Jones Industrial Average advanced 2.92%, while the S&P 500 rose 3.26%. The Nasdaq Composite index added 3.08% for the week. The MSCI EAFE index, which tracks developed overseas stock markets, gained 2.39%.
﻿
FACT OF THE WEEK
﻿
The Double Eagle II completes the first transatlantic balloon flight when it lands in a barley field near Paris, 137 hours after lifting off from Presque Isle, Maine. The helium-filled balloon was piloted by Ben Abruzzo, Maxie Anderson and Larry Newman and flew 3,233 miles in the six-day odyssey.
Human flight first became a reality in the early 1780s with the successful development of the hot-air balloon by French papermaking brothers Joseph and Etienne Montgolfier. Soon balloons were being filled with lighter-than-air gas, such as helium or hydrogen, to provide buoyancy. An early achievement of ballooning came in 1785 when Frenchman Jean-Pierre Blanchard and American John Jeffries became the first to cross the English Channel by air. In the 18th and 19th centuries, balloons were used more for military surveillance and scientific study than for transport or sport. As a mode of air travel, the balloon was supplanted by the self-propelled dirigible–a motorized balloon–in the late 19th century.
In the early 20th century, however, interest in sport ballooning began to grow, and an international trophy was offered annually for long-distance flights. Belgian balloonists dominated these early competitions. After World War II, new technology made ballooning safer and more affordable, and by the 1960s the sport enjoyed widespread popularity. The transatlantic flight, first accomplished by aircraft and dirigible in 1919, remained an elusive goal of elite balloonists.
Blown slightly off course toward the end of the journey, they touched down just before dusk on August 17 near the hamlet of Miserey, about 50 miles west of Paris. Their 137-hour flight set new endurance and distance records. The Americans were greeted by family members and jubilant French spectators who followed their balloon by car. That night, Larry Newman, who at 31 was the youngest of the three pilots, was allowed to sleep with his wife in the same bed where Charles Lindbergh slept after his historic transatlantic flight five decades before.
In 1981, Ben Abruzzo, Larry Newman, Ron Clark, and Rocky Aoki of Japan flew from Nagashimi, Japan, to Mendocino National Forest in California in the first transpacific flight. American Joe Kittinger made a solo transatlantic balloon flight in 1984. In 1995, American Steve Fosset accomplished a solo transpacific flight. One of the last frontiers of ballooning was conquered in 1999, when Bertrand Piccard of Switzerland and Englishman Brian Jones completed the first nonstop trip around the world in a hybrid helium and hot-air balloon. They flew from the Swiss Alps, circumnavigated the globe, and landed in Egypt, having traveled more than 29,000 miles in 20 days.
Then, in 2002, American adventurer Steve Fossett became the first man in history to fly around the world solo in a hot-air balloon. 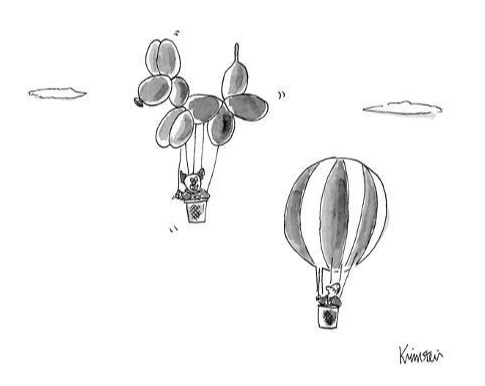 MARKET MINUTE
Lower Inflation Spurs Buying
Stock prices surged mid-week when the U.S. Bureau of Labor Statistics released a better-than-expected Consumer Price Index (CPI) number, with buying momentum building throughout the trading session.
Gains were significant across the board, with technology and small-cap companies leading the market higher. The mid-week rally sent the S&P 500 to its highest level since May and the Nasdaq to its highest level since April. Bond yields fell on expectations that the Fed's pressure to hike rates further might ease. After pausing on Thursday, stocks again ripped higher on Friday, aided, in part, by a report indicating improving consumer sentiment.
Inflation Cools
The Consumer Price Index in July was softer than expected, with prices unchanged from the previous month thanks to a 4.6% decline in energy prices and a 7.7% drop in gasoline.
Despite the encouraging results, the CPI report still evidenced upward price pressure. The year-over-year inflation rate remained at 8.5%, while the core CPI (excluding food and energy) came in at 5.9%. Among the index components seeing substantial price increases were food (+10.9% from 12 months ago) and shelter (+5.7%). Producer prices fell 0.5% in July, suggesting that future consumer price increases may continue to moderate.
FINANCIAL STRATEGY OF THE WEEK
Panic selling is not an investment strategy. Repeat: panic selling is not an investment strategy.
Investors who pull the emergency brake and bail out during a market decline almost always lock in a loss on their investments. And if they stay out of the markets, chances are good they’re going to miss the recovery, which further compounds any losses. Selling at a low – and then buying back when prices are higher – has never been a winning financial strategy.
While it is natural to be concerned about portfolio performance during declining markets, we can learn a lot about how we should (and shouldn’t) react by looking at history. What does each downturn have in common? A robust recovery.
While it can be painful to ride out the storm, historically the most pessimistic periods often make for good long-term buying opportunities. Of course, past performance is no guarantee of future results, but we encourage you to carefully consider all options before taking any action with your investments.
﻿Contact our office for an in-person meeting or phone call – we always want to be sure you feel confident about your position today AND in the future. We are here for you.
Have a great week!