Stocks spent last week digesting the sharp gains of previous weeks as investors assessed a tightening yield curve, the war in Ukraine, and an uncertain outlook for economic growth and inflation.

On April 6, 1896, the Olympic Games, a long-lost tradition of ancient Greece, are reborn in Athens 1,500 years after being banned by Roman Emperor Theodosius I. At the opening of the Athens Games, King Georgios I of Greece and a crowd of 60,000 spectators welcomed athletes from 13 nations to the international competition.

The first recorded Olympic Games were held at Olympia in the Greek city-state of Elis in 776 B.C., but it is generally accepted that the Olympics were at least 500 years old at that time. The ancient Olympics, held every four years, occurred during a religious festival honoring the Greek god Zeus. In the eighth century B.C., contestants came from a dozen or more Greek cities, and by the fifth century B.C. from as many as 100 cities from throughout the Greek empire. Initially, Olympic competition was limited to foot races, but later a number of other events were added, including wrestling, boxing, horse and chariot racing, and military competitions. The pentathlon, introduced in 708 B.C., consisted of a foot race, the long jump, discus and javelin throws, and wrestling.

In 1892 a young French baron, Pierre de Coubertin, seriously proposed reviving the Olympics as a major international competition that would occur every four years. At a conference on international sport in Paris in June 1894, Coubertin again raised the idea, and the 79 delegates from nine countries unanimously approved his proposal. The International Olympic Committee (IOC) was formed, and the first Games were planned for 1896 in Athens, the capital of Greece.

In Athens, 280 participants from 13 nations competed in 43 events, covering track-and-field, swimming, gymnastics, cycling, wrestling, weightlifting, fencing, shooting, and tennis. All the competitors were men, and a few of the entrants were tourists who stumbled upon the Games and were allowed to sign up. The track and field events were held at the Panathenaic Stadium, which was originally built in 330 B.C. and restored for the 1896 Games. Americans won nine out of 12 of these events. The 1896 Olympics also featured the first marathon competition, which followed the 25-mile route run by a Greek soldier who brought news of a victory over the Persians from Marathon to Athens in 490 B.C. In 1924, the marathon was standardized at 26 miles and 385 yards. Appropriately, a Greek, Spyridon Louis, won the first marathon at the 1896 Athens Games. 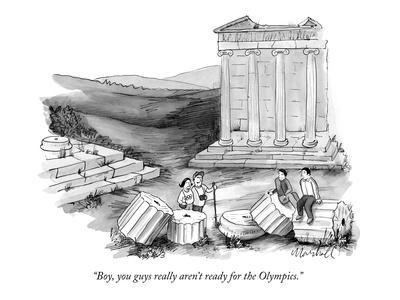 Stock prices bounced around following strong gains in two previous weeks as money managers appeared to reposition their portfolios ahead of the first-quarter close. Oil was under pressure all week as prices fell on news that Shanghai imposed a strict lockdown due to COVID infections. President Biden announced a sustained release of oil from the country’s strategic petroleum reserve.

Bond yields reversed their recent climb. The flattening in the yield curve triggered some concerns about economic growth and the possibility of a recession.

No doubt many of us wish we could go back in time to guide our younger selves toward what, in hindsight, might have been different choices. You probably know people who are still feeling the impact of financial decisions made years ago. While no one can change history, we can try to educate the young people in our lives so they don’t make the same mistakes.

Below are 3 tips to help financially guide the young people in your life.

That’s easy to say, but harder to do. Here are some tried and true ways to meet the challenge:

1) Automate it: Designate a certain amount of money to be automatically deducted from your paycheck and invested. Nobody misses what they don’t see in the first place.

2) Save it: If your employer offers a 401(k) plan, sign up as soon as you can and contribute as much as you can. If your company offers a match, take advantage. It’s like getting free money!

Understand the Power of Time + Compounding

When it comes to investing, time is one of your greatest allies. When time joins forces with compound interest, your account value grows dramatically. Think of compounding as getting a return on your return. Here’s an example:

If that 25 year-old waits 10 years to start investing, they would need to invest $1,679.23 each month using the same assumptions.

Prepare for the Unexpected with an Emergency Fund

Preparation is key for financial wellness. It’s a great idea, and it’s necessary. But how do you make it happen? Here are some steps to think about:

Get all your bills and expenses together to figure out about how much money you spend each month. A general rule of thumb for an emergency fund is to save enough to cover six months' worth of expenses. You don’t need to necessarily replace all your income, just have enough to cover the essentials.

Find a place to keep the money; ideally somewhere easily accessible – but not so easy that you’ll make spur-of-the-moment withdrawals.

Start saving, but start small. The thought of coming up with thousands of dollars can be overwhelming. Concentrate on getting that first thousand under your belt.
Treat funding this account like a monthly bill. Make it part of your budget and pay it every month, just like you do your rent, car payment, or credit cards. Remember, this fund is for unexpected events.

If you follow the steps, building in an emergency fund should become second nature, and you’ll give yourself a pat on the back as you see your financial stockpile add up.

If there are young people in your life that would benefit from some advice directly, or if you have questions regarding anything else, please feel free to contact us anytime.